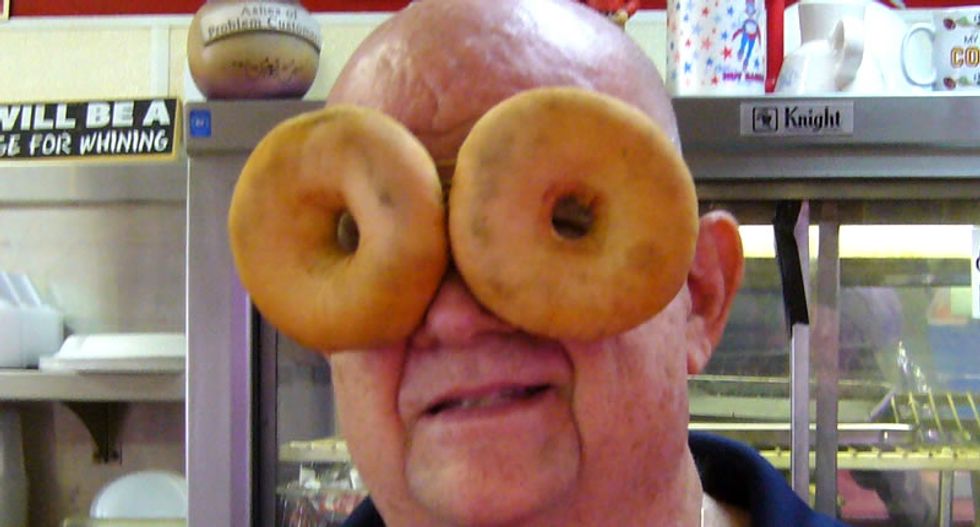 The Catholic owner of a Cincinnati-area bagel shop passed out challah to his customers at the start of the Jewish High Holy Days in order to protest an antisemitic United States Senate candidate, The Cleveland Jewish News reports.

John Marx, owner of Marx Hot Bagels in Blue Ash, Ohio, said he was "disgusted" by the posters of Senate write-in candidate Robert Ransdell, whose campaign slogan is "With Jews, We Lose."

Marx -- who frequently appears in his restaurant in a "Bagelman" costume of his own design -- was named 1971's "Righteous Gentile" by the local Jewish community for his service to it. "I enjoy owning a shop that caters to the Orthodox Jewish community," he told The Cincinnati Profile in 2010.

"The challahs I gave were mostly to gentiles because the Jews already had them for the holidays," he said. "It was pretty much later in the afternoon when I found out about this and I just started giving them away."

"Jesus said what you do to my people you do to me," Marx added. "My personal opinion is I think Jews, Catholics, Protestants should put aside their differences and get people in the political arena that have moral values and ethics. This country was founded on freedom of religion, not freedom from religion."

Ransdell has served as the Cincinnati-area coordinator of the National Alliance, a group with strong ties to the Ku Klux Klan.

In a lengthy post on the white supremacist site Stormfront, Ransdell wrote that "white people must have a Whites-only nation in America to survive and prosper, period. We cannot prosper, we can only cope, when we permit and allow Jews, Blacks, and other non-Whites into our living space and the long term health of our people is in peril as long as they are permitted to live amongst us."