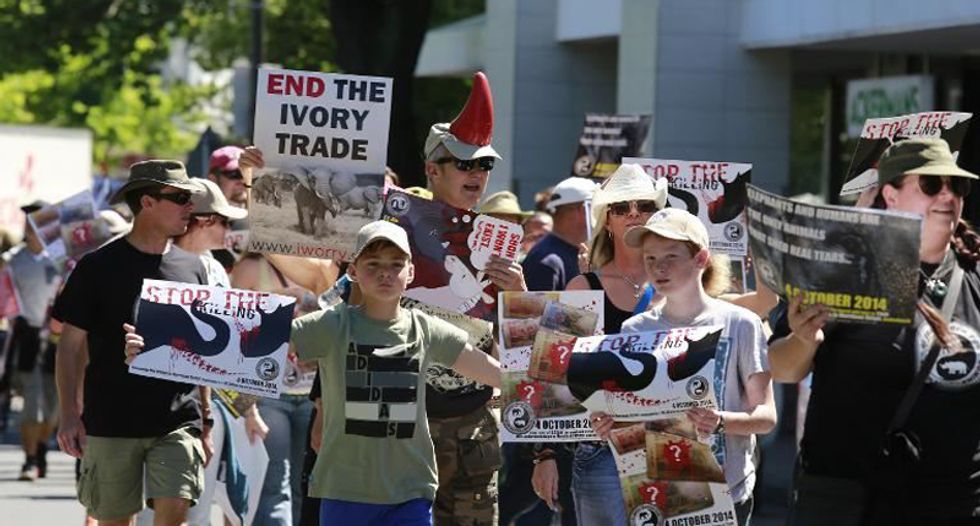 People carrying placards calling for the end to the ivory trade walk through the streets of Stellenbosch during the Global March for Elephants and Rhinos in Cape Town on October 4, 2014 (AFP)

Thousands marched in Africa and around the world to pressure governments to do more to stop the poaching industry that many fear is driving rhinos and elephants to the brink of extinction.

The protests, dubbed the Global March for Elephants and Rhinos, took place in 136 cities and towns across six continents, from Soweto to Nairobi, and Paris to New York and Tokyo.

In South Africa, which is struggling to stem a rhino poaching crisis, demonstrators gathered across 17 cities.

"We are protesting against the political leaders of the world, who do not have the guts and political will to make changes in their laws," Dex Kotze, one of the march organisers, told AFP.

"We have to do this for our future generation," he said. "The youth today is making a statement globally in 136 cities that it's their heritage that is being killed."

From 27 million elephants 350 years ago, Africa now has about 400,000 left, and roughly nine percent of those are being killed each year, Kotze said.

South Africa, home to the world's largest rhino populations, has seen at least 700 killed so far this year.

Poaching of the rare African animal is increasing to meet demand from Asian countries where the horn has long been used in traditional medicines for a variety of ailments, including fever and rheumatism.

More than 35,000 elephants are also killed across Africa very year for their tusks, which are prized, especially in China, for use in making decorations and trinkets.

Kotze said the protests meant to highlight the so-called "gang of 19" countries listed by CITES -- the international regulatory body for trade in wildlife -- as not doing enough to curb trafficking.

Among the countries under scrutiny are China, Vietnam, Laos, Mozambique, Angola and Kenya.

"These countries need to change their laws," Kotze said, singling out China, which he said must shut its 37 ivory carving factories and 130 retail outlets, or "we will lose all the elephants".

In the Kenyan capital Nairobi, several hundred people turned out to make their voices heard.

"We don't want to wait until the day that there is one elephant standing in Kenya. We want to take action now," Nyokabi Gethaiga, founder of the Let Live Movement, said.

Kotze said that wildlife crime is worth an estimated $20 billion (16 million euros) a year and that "terrorist organisations like Al-Shebab are using ivory trafficking and exchange ivory for weapons."

And "the future we're looking at if we can't stop the poaching and trafficking of ivory and rhino horn is that... we'll have lost all of our elephants and our rhinos, and we just can't afford to do that," he said.

But Jamey Ponte, co-organiser of the march in Kenya, said there are steps that governments could take to make an immediate difference.

The Kenyan Port of Mombasa "is the number one exporter of ivory in the world -- second is Dar es Salaam, Tanzania -- and there's no reason for it," he said. "Obviously, the government says they're against poaching here, but it's one port. There's no reason why we can't clean that up and stop that export."

Among the marchers at a demonstration in Iringa, Tanzania, was seven-year old Kendall Marillier, who carried a stuffed elephant.

"I don't want to see them in museums," he said. "In the wild. That's where they belong."

Small marches also took place in New York and Washington, with protesters demonstrating in the Big Apple despite the driving rain.

Outside the White House, demonstrators held up placards with the words, "Say No Ivory" and "Save the Elephant," while one protester donned an elephant outfit.

Following 556 days of pandemic-inflicted cancellations and unconventional concerts, the New York Philharmonic opened its new season Friday, a "homecoming" for musicians limited to live streams, one-off and outdoor shows for more than a year.

After enduring months of crisis, the Phil, one of America's oldest musical institutions, re-opened its subscription season with a program featuring Beethoven's Piano Concerto No. 4, Anna Clyne's "Within Her Arms," Aaron Copland's "Quiet City" and George Walker's "Antifonys."