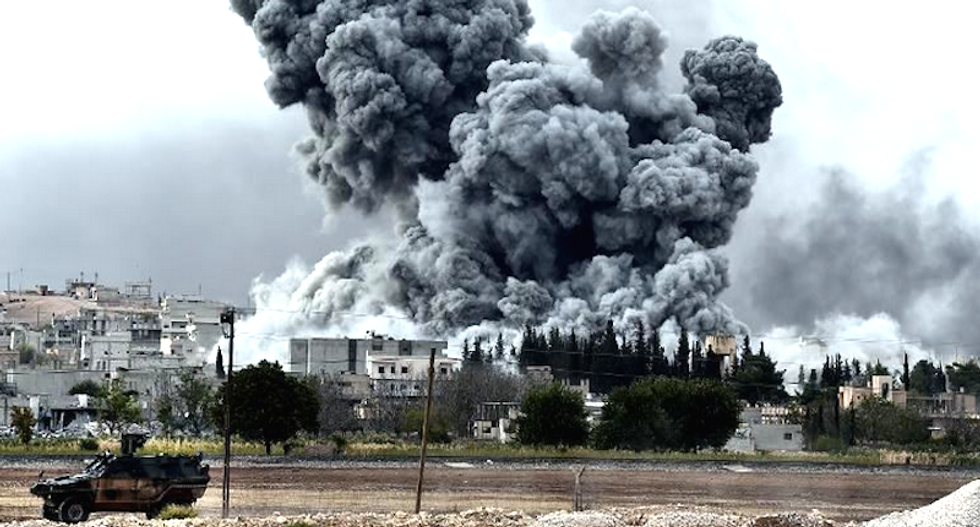 Smoke rises after an air strike on the Syrian town of Kobane, as seen from the Turkish border village of Mursitpinar (AFP)

Turkey agreed to let Washington use its air bases for the campaign against Islamic State jihadists as Kurdish fighters kept up their battle Monday to defend the flashpoint town of Kobane.

Under a deal announced by US officials, Turkey will also host training for "moderate" Syrian rebels, in the hopes of finally creating a force capable of tackling IS on the ground.

In Kobane, Kurdish militia were reported to have launched a counter-offensive against IS jihadists overnight but were battling to defend a key post on Turkey's border with Syria.

IS fighters were also putting strong pressure on pro-government forces in Iraq, with concern over the Anbar province and the key oil refinery of Baiji.

With the jihadists advancing on its doorstep, NATO member Turkey has come under intense pressure to take action as part of a US-led coalition that has been carrying out air strikes in Syria and Iraq.

U.S. officials said that Turkey had agreed to let Washington use its bases for the air campaign, including the key Incirlik Air Base near the border with Syria.

U.S. military planners have repeatedly warned that the air campaign alone will not be enough to defeat IS, which in June declared an Islamic "caliphate" in the large parts of Syria and Iraq under its control.

Turkish Prime Minister Ahmet Davutoglu on Sunday called for military backing for Syria's "moderate opposition" to create a "third force" in the war-torn country to take on the Damascus regime as well as IS militants.

In Kobane, Kurdish forces launched a counter-offensive to retake key areas seized by the jihadists last week, including their captured headquarters.

Kurdish fighters pushed IS militants back from two positions in the south Kobane overnight, the Syrian Observatory for Human Rights said.

Coalition air strikes hit five IS positions in the south and east of the town, the Britain-based monitoring group said.

An AFP reporter just across the border in Turkey said fighting was concentrated early Monday around a border post outside the town whose capture would cut it off from the outside world.

Turkey had moved reinforcements to the border including more tanks and self-propelled artillery, the reporter said.

Kobane has become a highly visible symbol of resistance to IS and its fall would give the jihadists control of a long stretch of the Turkey-Syria border.

UN chief Ban Ki-moon on Sunday called for urgent action to defend the town, saying thousands faced a potential "massacre" if it fell.

But concern has also been growing over Iraq, where IS fighters have been threatening to seize more territory.

Iraqi forces are reported to be under intensifying pressure in Anbar province between Baghdad and the Syrian border, where a roadside bomb killed the police chief on Sunday.

Pro-government forces have also been in trouble around Baiji oil refinery south of IS-held Mosul, where U.S. military aircraft on Sunday for the first time dropped supplies including food, water and ammunition to Iraqi troops.

Iraqis must 'take back' Iraq

Washington has insisted it will not send ground troops back to Iraq and Secretary of State John Kerry said Sunday the Iraqis themselves will have to succeed on the ground to win back their country.

IS has committed widespread atrocities in areas under its control, including attacks on civilians, mass executions, beheadings and enslaving women.

It has also murdered four Western hostages in on-camera beheadings, and on Sunday hundreds gathered in northwest England for a memorial service for British aid volunteer Alan Henning.

The 47-year-old taxi driver had travelled to Syria to help Muslim colleagues deliver aid in a convoy, but was kidnapped and his murder claimed by IS in a graphic video released on October 3.

His killing outraged the Muslim community in Britain and he was hailed at Sunday's ceremony as hero who "went to Syria to help at a time when the whole international community had abandoned them."

More than 180,000 people have been killed in Syria since an uprising against President Bashar al-Assad's regime began in 2011, evolving into a several-sided civil war that has drawn thousands of jihadists from overseas.