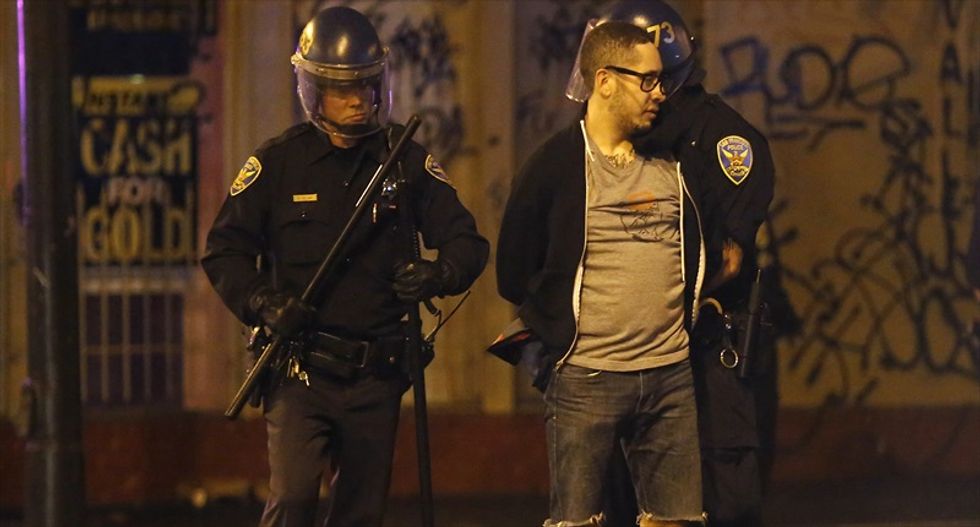 A man is being detained by the police after a street celebration in San Francisco, California on Oct. 29, 2014. Photo by Stephen Lam for Reuters.

Two people were shot, one was stabbed and around 40 were arrested as celebrations in San Francisco for the Giants victory in the World Series turned violent overnight, police said on Thursday.

A number of police officers were struck by bottles while responding to the mayhem and three were taken to local hospitals, one with severe lacerations to his hand, Sergeant Monica Macdonald of the San Francisco Police Department said.

Giants fans took to the streets on Wednesday night after the team won its third championship in five years by beating the Kansas City Royals, 3-2, in Game 7 of the World Series, behind the superb relief efforts of pitcher Madison Bumgarner.

Hundreds of people, many clad in the team's orange and black, flooded Valencia Street in the city's Mission District after the final out, perching on bus stops, setting off fireworks and toasting the Giants with beer or champagne.

"Bumgarner blew my mind tonight!" said San Francisco native Beau Adams, who sports a Giants tattoo. "The balance of superstition and belief and pride and confidence makes it all come together."

But as the impromptu street party dragged on late into the night, revelers began setting fires in the streets and vandalizing buildings and police cars with graffiti, Macdonald said. Police turned out in riot gear to break up the more unruly celebrations.

A passerby was struck in the arm by a bullet fired during an argument between two people, while a second man arrived at San Francisco General hospital with a gunshot wound he said he had sustained in the pandemonium. Another fight ended with one person stabbed, Macdonald said.

She said 29 people were arrested for public intoxication, two on gun charges, four on outstanding warrants and three for aggravated assault. She said police could make further arrests after studying videotapes of the scene and interviewing witnesses.

The destruction prompted concerns ahead of a parade scheduled for Friday in San Francisco to honor the team.

"We just hope that as the parade comes tomorrow and Halloween tomorrow night people maintain their composure out there, celebrate and not cause problems," Macdonald said. "If that's what they want to do we want them to stay home."

On Saturday, Donald Trump made stops in New Hampshire and South Carolina for the first major campaign events in his 2024 presidential bid, finding opportunities to make remarks against main competitor, Florida Gov. Ron DeSantis (R), even before exiting his aircraft and making way to the podium.

In an interview with reporters aboard his plane to South Carolina on Saturday, Trump said "Ron would have not been governor if it wasn't for me, and that's okay . . . then when I hear he might run, I consider that very disloyal."

It’s articles like this one by Brian Klaas that have me despairing for the future of the republic. Not because he identifies “a particularly insidious disease … that is not present to the same degree in other rich democracies,” which he calls extreme conspiracism. I despair, because articles like this one choose opaque abstractions over the clear and historical conditions in which “extreme conspiracism” is a feature.