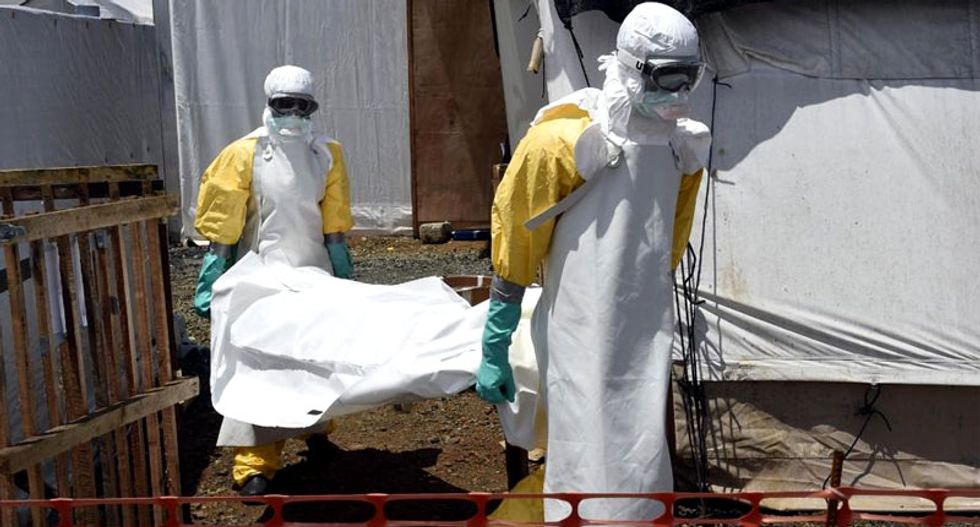 Medical staff carry the body of an Ebola victim at the Medecins Sans Frontieres center in Monrovia on September 27, 2014 (AFP Photo/Pascal Guyot)

A US photojournalist who was sickened with Ebola in Liberia and evacuated to Nebraska for treatment emerged on Twitter Monday saying he was feeling better and planned to blog about the experience.

Ashoka Mukpo, 33, was working as a freelance cameraman for NBC News in Monrovia when he fell ill with the virus that has killed more than 4,000 people in West Africa.

He arrived at Nebraska Medical Center on October 6, and his symptoms were "not extreme," his mother said at the time.

"Will be posting some thoughts this week. Endless gratitude for the good vibes."

He said he was working on a blog called the "Ebola Diaries" that would "compile material from long-term reporter residents of Liberia."

Officials at the Nebraska Medical Center said Sunday that Mukpo's health was improving.

He has received an experimental drug as a blood transfusion from Ebola survivor Kent Brantly, a US missionary doctor who also fell ill in Liberia.

"Now that I've had first hand experience with this scourge of a disease, I'm even more pained at how little care sick west Africans are receiving," Mukpo wrote.

Mukpo is the fifth American evacuated from West Africa with the help of the US State Department since the world's largest outbreak began earlier this year.