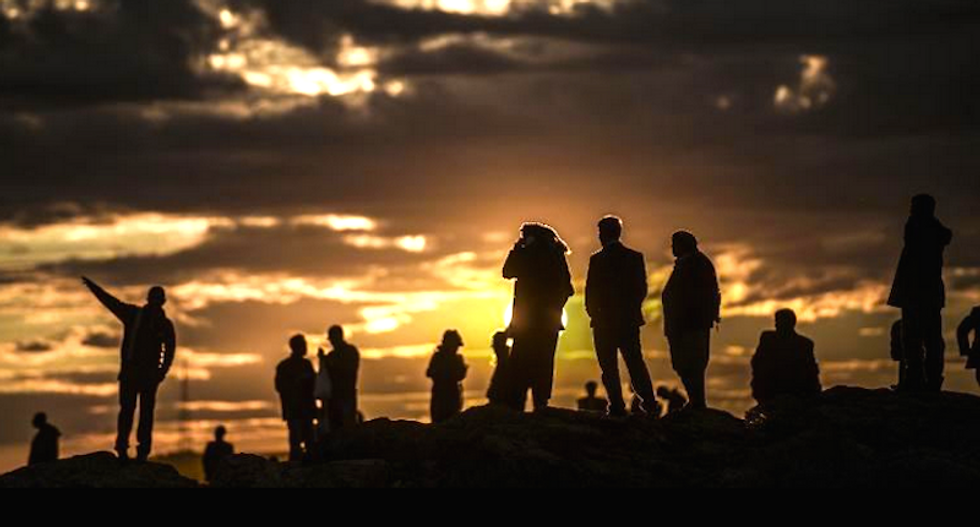 Washington made a first weapons drop to Kurdish fighters battling jihadists in the Syrian town of Kobane Monday that they hailed as a major boost for their nearly five-week resistance campaign.

The U.S.-led coalition has carried out more than 135 air strikes against Islamic State group (IS) fighters attacking Kobane but Washington had previously held off arming the strategic border town's Kurdish defenders.

The weapons were dropped by air as neighbouring Turkey has repeatedly refused to countenance delivering arms to the Kurdish fighters, who have links with Kurdish rebels who have fought a bloody three-decade insurgency in southeastern Turkey.

Washington has said repeatedly that the main priority in its campaign against the jihadists remains neighbouring Iraq, where IS seized much of the Sunni Arab heartland north and west of Baghdad in June.

But a senior administration official said the arms drop was a recognition of the "impressive" resistance put up by the Kurdish fighters and the losses they were inflicting on IS.

The aircraft faced no resistance from the air or the ground, were not accompanied by fighter jets and exited the area safely, a senior US official said, refusing to rule out a repeat of the action if needed, possibly in the near future.

The supplies were "intended to enable continued resistance against ISIL's attempts to overtake Kobane," Central Command said, using an alternative acronym for IS.

'We hope for more'

The main Syrian Kurdish fighting force in Kobane swiftly welcomed the US arms drop, saying it would "help greatly" in the defence of the town.

"The military assistance dropped by American planes at dawn on Kobane was good and we thank America for this support," said People's Protection Units (YPG) spokesman Redur Xelil.

"It will have a positive impact on military operations against Daesh and we hope for more," he added, using the Arabic acronym for IS.

Xelil declined to detail the weapons delivered but said there was "coordination" between US officials and YPG forces over the drop.

IS fighters launched their offensive on Kurdish fighters around Kobane on September 15, swiftly pushing them back to the town itself and sparking an exodus of 200,000 refugees over the border into Turkey.

But the Kurds have kept up a dogged resistance on the streets of the town, of which they currently control around half.

Kobane would be a prize for IS as the town is strategically located along a long stretch of the Syrian-Turkish border that is largely under the group's control.

The battle is being fought under the gaze of the world media massed just across the border in Turkey and IS has taken heavy losses in it.

From Saturday into Sunday morning, 31 IS militants died in the battle, said the Syrian Observatory for Human Rights.

On Friday, IS lost 35 of its fighters, said the Britain-based monitoring group, which has a wide network of source inside Syria.

One senior administration official said that Kurdish fighters had put up an "impressive" effort in the face of IS, but cautioned that the security situation was "fluid."

IS made a new attempt to advance on the town centre late Sunday but were repulsed with the loss of eight of its fighters, the Observatory said.

"The balance of power could turn at any moment," it added.

Coalition aircraft carried out 11 air strikes against IS targets around Kobane on Saturday and Sunday, Central Command said, helping Kurdish fighters repulse a new IS attempt to cut their supply lines from Turkey.

Washington has been pressing Ankara to take a more direct role in taking on IS but its efforts have been complicated by Turkey's concerns about emboldening nationalist sentiment among its own large Kurdish minority.

The YPG has close links with Turkey's outlawed Kurdistan Workers Party (PKK), which is blacklisted as a terrorist group by both Washington as well as Ankara.

Just Sunday, Turkish President Recep Tayyip Erdogan again described the YPG as "terrorists" and ruled out any arms deliveries to it.

But a senior administration official said Ankara had been informed in advance of the US air drop.

President Barack Obama spoke to Erdogan on Saturday "and was able to notify him of our intent to do this and importance we put on it," the official said.

"We understand the longstanding Turkish concern with the range of groups, including Kurdish groups, they have been engaged in conflict with and in peace talks with."

However, IS was "a common enemy" for the United States and Turkey, the official said.