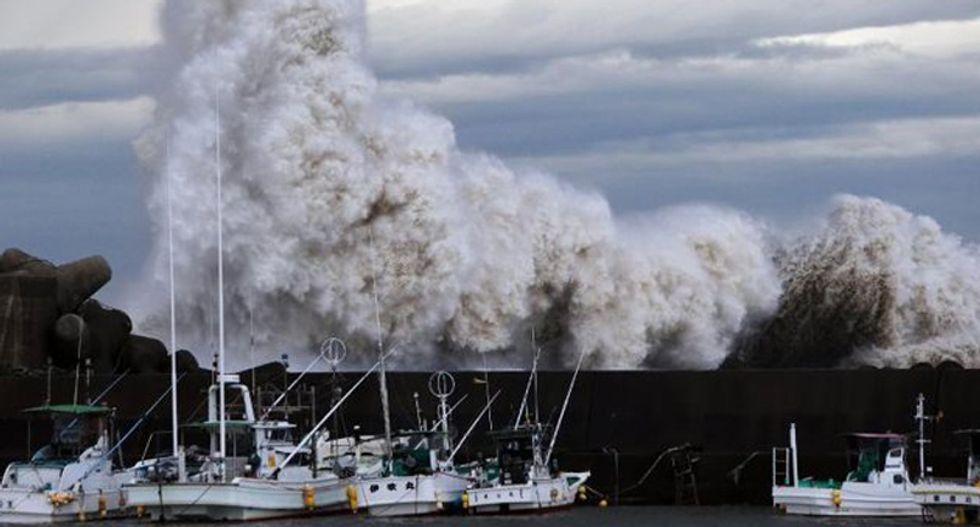 Strong typhoon Phanfone slammed into Japan on Monday, packing gusts and huge waves that have already swept three US military officials out to sea, as it made a beeline for Tokyo.

Winds of up to 180 kilometres (112 miles) per hour whipped ashore as the typhoon made landfall in central Japan early in the morning, the meteorological agency said.

The storm was near Yokohama, just south of Tokyo at 11:00 am (0200 GMT), heading directly for the political, cultural and economic capital of the country.

Four people are already dead or missing, including three US military officials, according to Japanese police and coast guards.

Typhoon Phanfone has also grounded more than 600 flights, and forced Japanese authorities to suspend the search for the bodies of those still missing more than a week after a volcano erupted, claiming dozens of lives.

The leading edge of the storm brought a nasty commute to Tokyo's morning rush hour, with hundreds of thousands of office workers caught up in the driving rain that was lashing the streets.

The agency warned that landslides, floods, high waves and heavy rains could hit a large swathe of the archipelago, where a relatively wet summer brought numerous landslides, including in Hiroshima where more than 70 people died.

Rail and road traffic were partially suspended while schools were closed in central and eastern Japan.

Local governments in many areas issued evacuation advisories for hundreds of thousands of residents.

In the central Japan prefecture of Shizuoka, more than 50,000 people were ordered to evacuate and nearly 1.7 million other residents were advised to take refugee, local authorities said.

The first fatalities of Phanfone had already been recorded.

Three US military officials were engulfed by high waves triggered by the storm on the southern island of Okinawa.

"Three officials were taking pictures with high waves whipped up by the typhoon in the background," a spokesman at local police said.

"One has been found dead, with the two others still missing," he said early Monday.

A 21-year-old surfer was also missing in the Pacific off Fujisawa, southwest of Tokyo, a coast guard spokesman said.

About 10 people were injured across the nation in storm-related accidents, public broadcaster NHK said.

The operator of the tsunami-crippled Fukushima Daiichi nuclear power plant on the northeastern Pacific coast was braced for the typhoon as the weather agency warned of rainfall as heavy as 50 millimetres (two inches) per hour on Monday.

Tokyo Electric Power Co. has halted ground and sea work with cables and hoses bundled and heavy machinery laid down.

"We are also patrolling and checking where water may flow in," a company spokesman said.

Meanwhile, the search was suspended for the bodies of at least 12 hikers believed to be lying on the still-smouldering Mount Ontake, from where 51 have already been retrieved.

The volcano was packed with walkers when it burst angrily to life on September 27, with many there to witness the spectacular colours of the countryside at the arrival of autumn.

The eruption is Japan's deadliest in almost 90 years and nearly 1,000 troops, firefighters and police have participated in a search made treacherous by the gases still rising from the peak, as well as a knee-deep layer of sticky ash.

"We want to resume operations as soon as possible when weather permits," said an official of the crisis management office of Nagano, where the volcano sits.