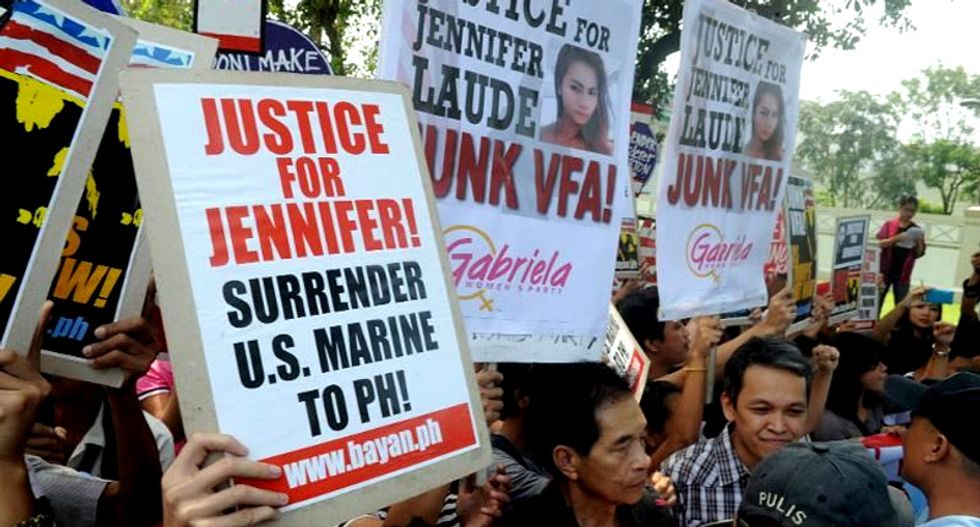 Protesters march towards the gate of the US embassy in Manila during an anti-US rally on October 16, 2014. The demonstrators are demanding the US marine who allegedly murdered a transgender Filipino be thrown in a local prison (AFP)

Relatives of a transgender Filipino allegedly murdered by a US Marine angrily demanded Thursday that the accused be thrown in a Philippine prison.

The family and protesters who took to the streets Wednesday criticised the Manila government for allegedly dragging its heels over the weekend killing that threatens to test the longstanding defence ties between Manila and Washington.

"This is not an ordinary murder case. This is a hate crime," Harry Roque, lawyer for the family of victim told a news conference in the northern port of Olongapo, where Jeffrey Laude, 26, was found dead.

Roque said police concluded the victim suffocated to death after after his head was dunked into the toilet bowl of a hotel where he and the suspect had checked in late Saturday.

The victim's mother wept as she spoke alongside Roque before television cameras to demand the suspect's transfer to a Philippine jail.

"We the poor have a right to seek justice too. The government should not ignore us," Julita Laude said.

Philippine police on Wednesday referred the case to state prosecutors, who will decide whether to file a murder charge against Private First Class Joseph Scott Pemberton.

The American could face life in prison if convicted in a Filipino court.

He remains in US custody on an American warship anchored off Olongapo.

The Marine and the vessel had taken part in joint military exercises involving thousands of Filipino and US forces that ended last week.

Police blocked about 70 protesters marching on the US embassy in Manila on Thursday.

The protesters carried placards demanding that the mission "Surrender Pemberton" and for Manila to cut US military ties.

"We will formally request custody once an arrest warrant is issued by the court," Jose told reporters.

However, prosecutors have yet to decide whether to bring charges in court after the initial evidence hearings that could take weeks.

Jose said the government is sticking to provisions of a 1998 treaty governing the legal liability of US troops in the Philippines, a mutual defence partner of Washington.

Under the accord, the US government retains custody of American troops accused of a crime in the Philippines although the Philippines can ask Washington to waive custody.

Asked if the United States would turn over the suspect, the US embassy issued a statement saying: "Any offences covered by US service members would be handled in accordance with the applicable provisions" of the 1998 visiting forces treaty.

In 2006, a Philippine court sentenced US Marine Lance Corporal Daniel Smith to 40 years in jail for raping a Filipina near Olongapo a year earlier.

Smith walked free in 2009 after his accuser recanted her statement, prompting the court to acquit him.