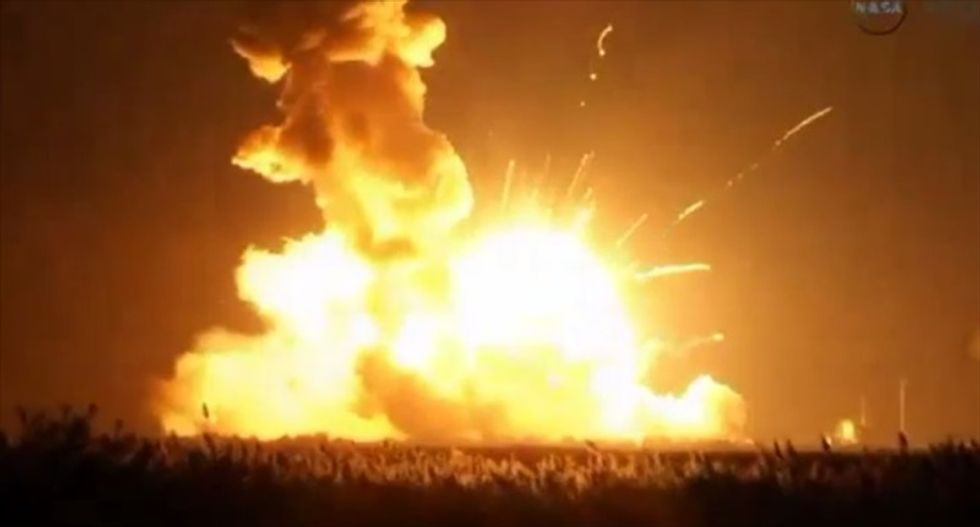 Antares rocket explodes just after taking off on Oct. 28, 2014 [YouTube]

An unmanned rocket exploded just after taking off on Tuesday evening from a NASA facility in Virginia, Mic.com reported.

Footage posted online shows the Orbital Sciences Corp. rocket leaving the ground at the Wallops Flight Facility. It was carrying a Cygnus spacecraft that was designed to carry supplies to the International Space Station, but flames can be seen engulfing the rocket less than 20 seconds into its voyage and falling back toward the ground, where it exploded.

The rocket was supposed to launch on Monday, but as NBC News reported, it was delayed after operators spotted a sailboat downrange from the facility.

No personnel were injured in the blast. NASA has already begun an investigation.

Update, 7:36 p.m. EST: Motherboard posted a list of the items inside the rocket that went up in the blast:

"These are very old engines (built in the 1960s and ’70s) that are refurbished," Plait stated. "While it's not known if these were the cause of the explosion, they’re an obvious bet and I’m sure will be the primary suspect in the investigation."

The video, as posted online on Tuesday, can be seen here.

NASA is also airing a live feed from the facility, which can be seen here.