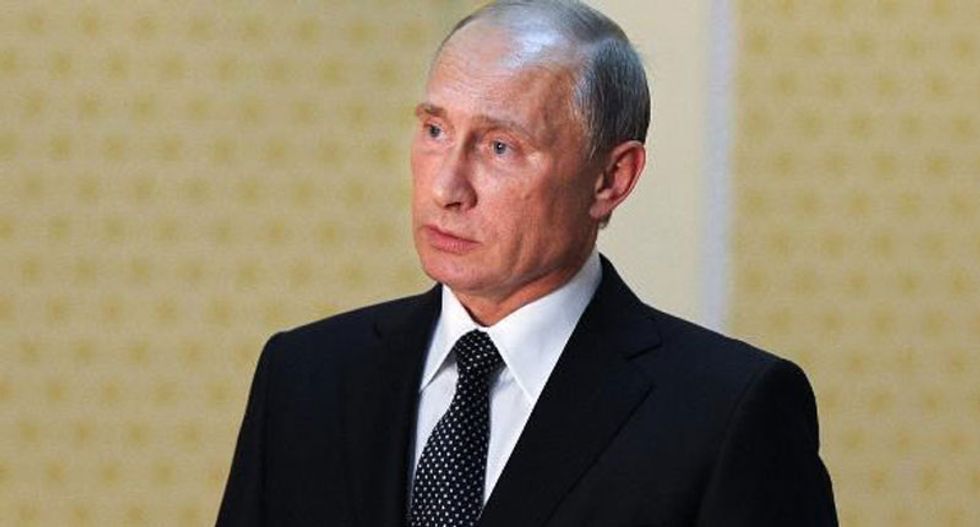 Vladimir Putin may not be a god, but he is a superhero. That was the message at an exhibition of paintings depicting the Russian president as Hercules, held at a small Moscow gallery space on Monday.

Opened for one night only in honour of Putin’s 62nd birthday on Tuesday, the exhibit reimagined his achievements as the 12 Labours of Hercules, beginning with the slaying of the Nemean lion – in this case, Putin strangling a bearded suicide bomber representing terrorism – and ending with the capture of the three-headed dog Cerberus, which symbolised the struggle with the United States and its “unipolar world”.

The most impressive painting, created in the gold-on-black style of ancient Greek pottery decorations, showed a muscular Putin lifting his shield against the poisonous breath of the Lernaean Hydra – or western sanctions against Russia. The US head of the hydra had been lopped off, reflecting the ban on food imports from the US, EU, Norway, Canada and Australia that Russia adopted in August, said the exhibit organiser, Mikhail Antonov.

“We’re forming a different image of Putin because the western media constantly criticises him, and our media occasionally attacks him as well,” Antonov said. “But here we see him completing these heroic deeds. We see that the interpretation of these events is not so categorical.”

Antonov, a political science graduate student at a Moscow University, heads a Putin fan group on Facebook that has received more than 266,000 likes. He said the Herculean portraits, which he hoped to be able to give to the president as a birthday gift, were painted by an anonymous “collective of artists” who followed the group.

The paintings focused mostly on current events such as a recent gas contract with China, the planned purchase of Mistral warships from France, and the eastern Ukraine ceasefire negotiated in Minsk. Antonov praised Putin’s government for standing up to the “junta” in Kiev, and in the paintings Russia’s annexation of Crimea is portrayed as the Herculean Putin capturing the Cretan bull.

The majority of the attendees at the exhibit were journalists, but a group of students said they had come at Antonov’s invitation. Anna Mkutekyan, who studies finance, said she didn’t “know enough about politics to criticise our president”, but said she and her friends agreed with his actions and were “proud of our country”.

Her favourite painting, she said, was one showing Putin holding up the heavens, as Hercules is said to have done for Atlas. “The sky that could fall on the earth is the war in once-thriving Ukraine. And it’s only with the help of Putin, who achieved the Minsk peace agreement, that it hasn’t fallen yet,” read the description beneath the painting.

“It expresses today’s reality because Putin unifies countries that are close to each other … those who support us, who understand the situation in the world as it really is,” Mkutekyan said.