WATCH: Cops blast unruly 'Moor' with pepper spray after he insists he's exempt from US law 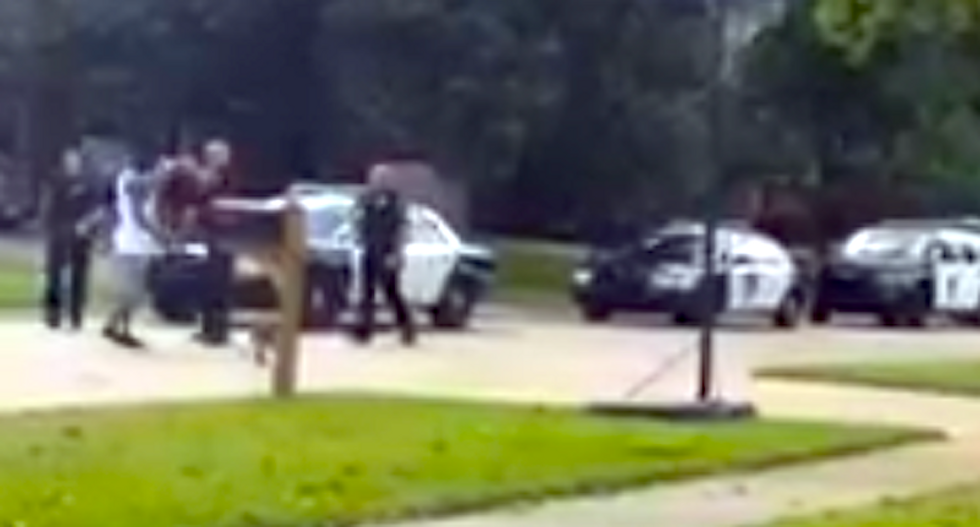 Police blasted a “sovereign citizen” in the face with pepper spray as he approached them Monday in a Louisiana subdivision.

Witnesses reported the man had been sitting in the street with a shotgun, and the man himself called 911 to report his rifle was loaded, reported KTBS-TV.

The man, whose name has not been released, also told authorities he planned to start a hostile takeover and asked police to come to him with some marijuana.

"There are individuals who consider themselves sovereign citizens, who do not recognize local law enforcement as an authority, and this individual claimed to be that type of person," said Mark Natale, a spokesman for Bossier City police.

Officers did not bring any pot, but they did come to the scene and found the man yelling obscenities and exposing himself.

The man then approached police with a piece of paper that listed him as Moor – and therefore exempt from U.S. and local laws, a friend told the TV station.

A cell phone video recording of the confrontation shows one of the officers use pepper spray just inches from the man’s face, and he quickly retreats.

“I don’t need no damn gun – I’m the weapon,” he shouts at officers, and then asks if they’re going to take him “back to the crazy house.”

A fez-wearing man then turns the video camera on himself, smiles broadly, and then records officers taking the other man into custody about 10 feet away.

Police said they believe the man intentionally provoked officers in the videotaped encounter, comparing the incident to others that have been recorded and posted online by Moorish sovereign citizens.

"There was some intention of agitating the officers by being there and videotaping it," Natale said. "But from all indications the officers acted appropriately. The acted very professionally in taking care of a problem."

Police said the man spit on an officer after he was handcuffed and broke a rear side window of a patrol car in an escape attempt.

The man was taken to a nearby hospital for a psychological evaluation, so his name was not publicly released.

He was charged with reckless conduct with a weapon, criminal property damage for the police cruiser window, misuse of 911, battery on a police officer, and obscenity.

Police said no further investigation would be conducted into the officers’ conduct during the encounter.

The Moorish Science Temple of America released a statement condemning the man’s actions, saying they did not represent the religious group’s teachings.

"We denounce instances such as this because we don't need any one running around creating havoc and sullying up this Divine and National Movement," said spokesman Alozie-Walton El. "There are many who seek to run and hide behind this movement, while perpetuating acts of nonsense."

The Moorish spokesman said the man faced “severe disciplinary action” from the group.