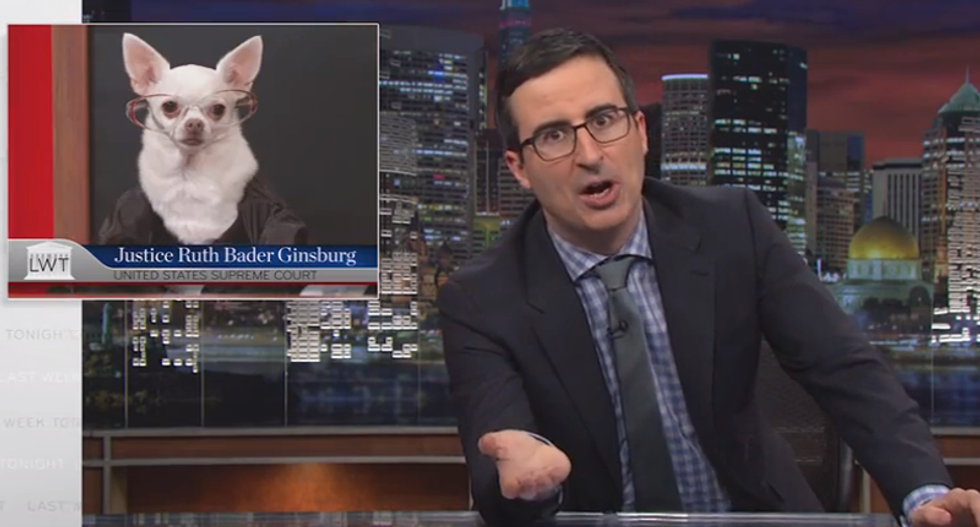 Because the US Supreme Court refuses to allow live video coverage of cases being debated, John Oliver and the Last Week Tonight staff have created a mock Supreme Court set featuring each justice portrayed by a dog as a public service to the major news networks and viewers at home.

Noting  the Supreme Court recently began their annual session, Oliver pointed out that it is "one to watch" before reminding that Americans that they are not allowed to see the court in action since cameras are banned within the chambers.

Oliver introduced a clip of Justice Antonin Scalia dismissing concerns over the lack of video, with Scalia saying Americans would only see brief clips of arguments which would be unrepresentative of the work the justices do.

"If I really thought it would educate the American people, I would be all for it," Scalia explained. "But what most of the American people would see, would be 30-second, 15-second takeouts from our argument, and those takeouts would not be characteristic of what we do."

Oliver pointed out that the networks already use brief audio takeouts of arguments accompanied by poorly drawn courtroom sketches, noting one sketch that made Justice Elena Kagan look like "Jonah Hill in a wig."

Explaining that the snippets are "boring," and pointing out "what happens at the Supreme Court is way too important no to pay attention to," Oliver explained that the staff at at "Last Week Tonight" had a solution.

"This week we spent an incredible amount of time and an almost immoral amount of resources to produce an entire Supreme Court featuring real animals with fake paws," Oliver explained before sharing a clip with, "Let me show you this puppy in action."

It's not something we can't explain, you'll just have to watch it for yourself if only to see poodle "Justice Samuel Alito" attempt to "hump" bull terrier Justice Kagan.

Watch the video below, from Last Week Tonight: