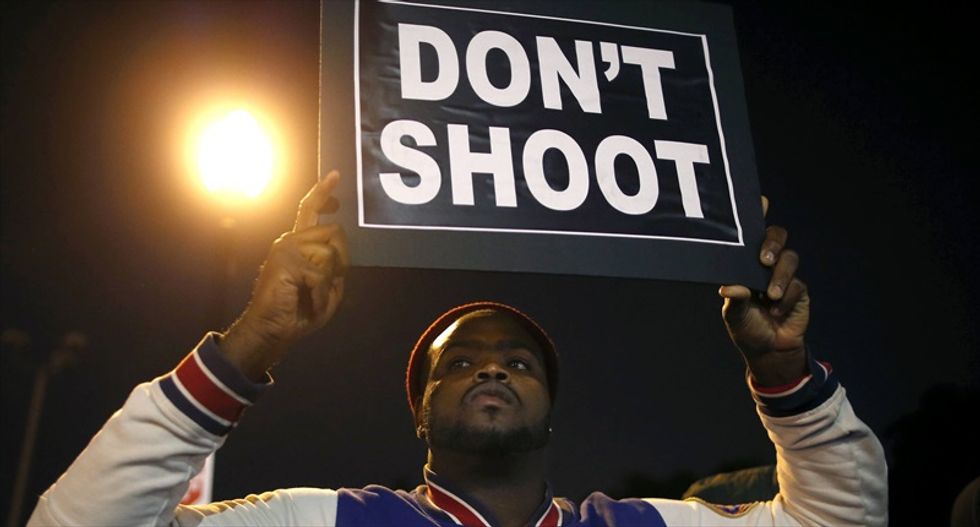 A protester holds up a sign across the street from the police station during a protest in Ferguson, Missouri on Oct. 10, 2014. By Jim Young for Reuters.

Hundreds of protesters gathered outside the Ferguson, Missouri police station late Friday, chanting against police violence and pushing forward a weekend of demonstrations after eight people were arrested in chaotic protests the previous night.

The crowd of roughly 300 people stood in the middle of the street chanting phrases such as "My hands on my head. Please don't shoot me dead" and "Who shuts it down? We shut it down!" Roughly 30 regularly uniformed police officers stood guard outside the department.

There were none of the clashes with police that have marked protests in the St. Louis area since a white police officer shot dead an unarmed black teenager in August.

Violence broke out again this week after another black teenager was shot dead by an off-duty police officer on Wednesday.

Civil rights organizations and protest groups have invited people from around the country to join vigils and marches from Friday to Monday over the Aug. 9 shooting of Michael Brown, 18, in the St. Louis suburb.

Brown's parents, Lesley McSpadden and Michael Brown Sr., on Friday asked that the protests to be peaceful.

"We understand first-hand the powerless frustration felt by people of all walks of life regarding their interactions with law enforcement," they said in a statement. "We ask that those coming to show support for our son do so within the law."

Earlier on Friday, hundreds of protesters peacefully marched for 90 minutes through the rain to the St. Louis County courthouse in Clayton, adjacent to St. Louis. Dozens of demonstrators later attended a candlelight vigil and held a moment of silence for Michael Brown in nearby Ferguson.

Groups such as Hands Up United have organized candlelight vigils, presentations from motivational speakers, free yoga classes and teach-ins about how to interact with police officers during stops.

"Local police departments have gassed us, beat us and shot us with rubber bullets, but they cannot stop our march for justice," Tef Poe, a local rapper and organizer with Hands Up United, said in a statement.

Protesters are calling for the arrest and prosecution of Ferguson police officer Darren Wilson, who shot Brown.

A grand jury has been weighing the evidence to decide whether Wilson should be charged in Brown's shooting. Brown's killing in a mostly black town with a mostly white government leadership set off a national uproar over police accountability and race relations.

Wednesday's shooting of Vonderrit Myers Jr., 18, by an off-duty white officer working for a private security firm in what police say was a firefight about 10 miles (16 km) from Ferguson in south St. Louis put the area on edge again.

Police arrested eight people during protests on Thursday night when hundreds of demonstrators shouted and chanted at rows of police clad in riot gear in south St. Louis.

(Writing by Fiona Ortiz and Curtis Skinner; Editing by Will Dunham and Richard Borsuk)

MSNBC has posted a livestream of Friday night's protest, which can be seen below.

Independent journalist "Rebelutionary_Z" is also livestreaming from the protests. His channel can be seen here.