WATCH: Tea Party gadfly can’t back up his Obama conspiracies, even on a conservative network 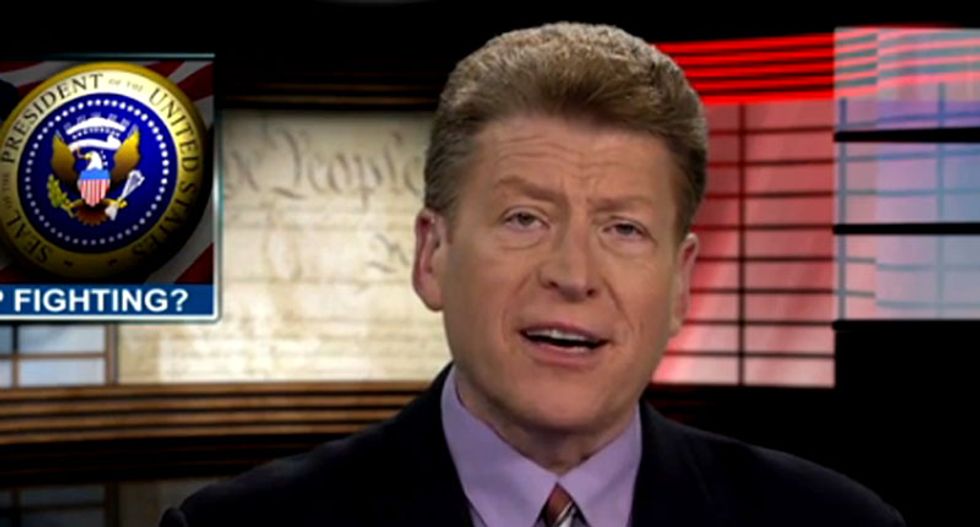 Klayman, a former U.S. Justice Department prosecutor and the founder of Freedom Watch, filed a deportation petition against Obama last week, claiming the president falsified his birth certificate and other documents.

Klayman told Berliner that Obama's birth certificate listed his race as "African-American," but that the term wasn't in use when Obama was born in 1961. Klayman added that Obama had also allegedly used fake Social Security numbers and was "in fact, an illegal alien."

But Berliner noted that Klayman's allegations had already been debunked by independent fact checking groups, like FactCheck.org.

Berliner later displayed an image of Obama's birth certificate on the screen, and noted his race was listed as "African" -- not "African-American," as Klayman had claimed.

The certificate was validated by the Hawaii state government and publicly released in 2011.

Klayman, however, continued to insist that his claims were true.

"I'll tell you what the litmus test is," Klayman said. "This guy acts as if he's Muslim, and he acts as if he has an affinity towards these people. Of course, his father was half Muslim. He in fact has been very negative, if not destructive, towards Israel. In my view, he is anti-Semitic."

When Berliner asked how Obama was acting Muslim, Klayman replied with a short list of debunked allegations. He said Obama wore a ring that says "My only God is Allah" and that the president had canceled the National Day of Prayer, among other things.

Berliner questioned if going after Obama's birth certificate was really the best way for conservatives to stop the president.

"We are trying everything we can to get rid of this guy. I mean, legally. He's going to destroy the country if he stays (in office) for another two years. We are dangerously close right now," Klayman said.

"Would you say the midterm (elections) have the opportunity to perhaps derail some of what you believe he is doing?" Berliner asked.

"Who is willing to do it, OK?" Klayman said, after a long pause. "The American people. I believe in a peaceful revolution using the legal system."

For his final question, Berliner asked Klayman if he was just seeking attention.

"I don't seek publicity," Klayman remarked. "I want to get the job done, and I thank you for putting me on your show so we can get the word out."

"Well, we do want to get the word out, but also want to make sure the truth gets out as well," Berliner said.

"Were our founding fathers looking for PR?" Klayman shot back. "They weren't looking for PR. They were trying to save the colonies."