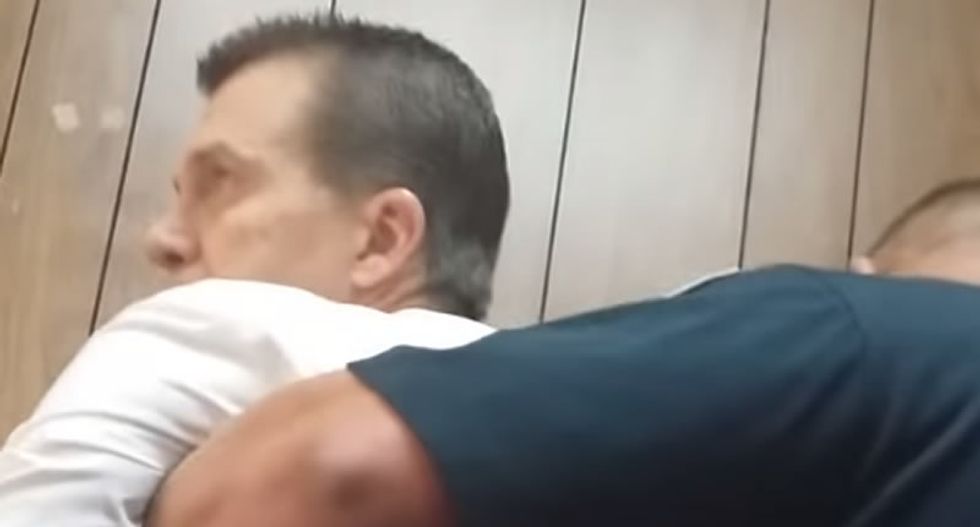 A pastor and vocal advocate for Open Carry Texas was arrested Tuesday for disrupting a public meeting, the EasTex Advocate reports.

Terry Holcomb Sr., pastor of Crossroads Baptist Church and president of the San Jacinto County Republican Club, became incensed when he learned that no time would be allotted for public comments at the conclusion of a San Jacinto County Commissioners Court meeting. He noted the reason for attending the meeting on Facebook:

When he learned of County Judge Fritz Faulkner's decision would prevent him from doing so, he wrote, "this is not going to end well," then attended the meeting anyway.

As it concluded, he asked, "We're not gonna allow public comments today?"

"It's not on the agenda," Judge Faulkner replied.

"That's unacceptable," Holcomb said. "That is taking the right of the people -- their voice."

"You are disrupting a public meeting," Faulkner said.

"This meeting's been adjourned," Holcomb replied. "So I can get as dangerously close [to disrupting the meeting] as I want. You're not the king. This isn't gonna operate under tyranny. The people have a right to have their voice heard, period, and you left the public comments off [the agenda] because you don't want to hear from the citizens."

"You're gonna hear from me!" he continued. "You're not going to silence us by your abuse of power."

At this point, Judge Faulkner asked security to remove Holcomb from the room.

"I am breaking no laws here!" he proclaimed. "And I am not leaving!"

"Yes, you are," Faulkner replied.

As he was being escorted from the room, he pointed at the council and said, "y'all commissioners, who are standing by and allowing this? Y'all are cowards. All of you. You are violating the Constitution, and it is your job to uphold the Constitution."

He then began to practice what protesters call "passive resistance," but insisted, "I'm not resisting."

"You are not following my lawful order," the court officer told him. "So you're resisting. Do you want to go to jail for resisting? I'm asking you a question."

"Hold my phone," Holcomb replied, handing his phone to the man recording the video. Then, pointing to Judge Faulkner, he said, "I'm coming back, I promise you. Your abuse of power isn't gonna stand."