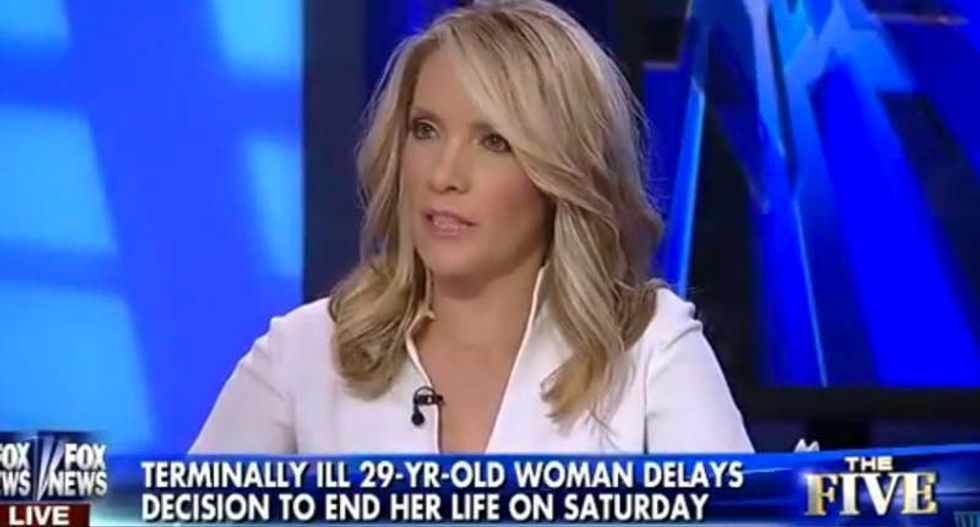 In a surprising change of pace for a show normally devoted to taking the topic of the day and putting a conservative spin on it, the entire cast of Fox News The Five came down firmly on the side of Brittany Maynard, the 29-year-old woman with brain cancer who has chosen to end her life.

Maynard, who was only given six months to live in the spring, had announced at the beginning of October that she would be taking her life on November 1, but has since postponed the day saying, " I still have enough joy I still laugh with my family and friends enough, it doesn’t seem like the right thing right now,” before adding, “But it will come, because I feel myself getting sicker, and it’s happening each week.”

While many conservatives, such as Pat Robertson, have condemned Maynard's decision, members of The Five panel  agreed that they would not question a person's decision to take their own life, with several relating personal stories about losing loved ones to cancer or other diseases.

Pointing out that she found it interesting as a "public policy debate," host Dana Perino said, "Personally, it’s not a choice I would want to make. But I don’t know if I have a right to tell anyone else what they should do.”

Co-host Kimberly Guilfoyle explained that she has seen the impact terminal illnesses can have on all involved up close.

"I've seen how it affects the family members and how it affects the person, most especially in terms of how they feel about leaving those behind them," a somber Guilfoyle said. "And there is always this very tough pull between wanting to try and survive and hang in there a day longer to be with them, but also not wanting to be a burden and also physically bearing the incredible pain of a terminal illness."

"It's very difficult and I feel for any family that goes through it. This is her decision, this is her choice. I would never put myself in her position to pass a judgement as to what she should do. I think she's expressing a feeling that she believes in. Obviously the sanctity of life, while at the same time understanding she has a terminal diagnosis."

Bob Beckel chimed in describing friends and family who dealt with major illnesses, stating, “I think, in a situation like this, people have every right in the world to decide whether they want to go to their maker or not."

Mentioning family members he had lost to cancer, Eric Bolling agreed saying “If anyone had every said, along the road, that they wanted to have an assisted suicide, I would have been on-board.”

Greg Gutfeld concluded the discussion saying it was foolish to make suicide a crime, saying, “Suicide as a crime, I’ve just never understood. How is that a deterrent? You can’t put me in jail after I’ve already jumped off the cliff."

Watch the video below, uploaded to YouTube by The Red Eye: