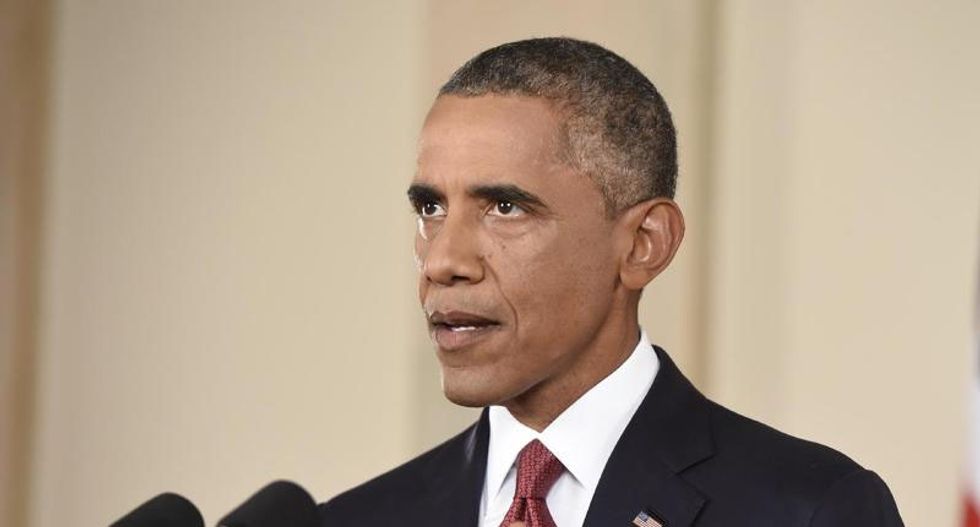 Rising public anxiety about the Ebola virus has forced the White House to shift into crisis mode and cancel two days of planned political events as President Barack Obama strives to show he has control over stopping the spread of the deadly disease.

Just three weeks ahead of critical midterm elections, Obama is facing increased pressure from Republican critics. They say he has been too slow to protect Americans, drawing parallels to what they have described as foot-dragging on dealing with the threat from Islamic State militants in Iraq and Syria.

Democrats who are at risk of losing control of the Senate in the November elections are worried that public concerns over Obama's management of Ebola could hurt them, too.

Obama's job approval ratings are at 39 percent, according to Reuters-Ipsos polls in the first week of October.

"At a time in which his job approval rating is quite low and his party is suffering because of it, I think that this is just one more cut in what's turned out to be the death by a thousand cuts for President Obama," said Ross Baker, a political scientists at Rutgers.

Republican lawmakers, including U.S. House Speaker John Boehner, turned up the pressure on Wednesday with calls for travel bans for the three African nations afflicted by the Ebola outbreak.

Polls show that move would be popular with Americans. The White House has ruled out a ban, saying it would hamper the movement of supplies and aid workers needed to help stop the epidemic in the region.

Other lawmakers, including some Democrats, have urged the White House to name a point person to coordinate the response, lead briefings, and command public confidence.

"It's getting away from them, and this is becoming a real concern for us," said a Democratic Senate aide, who spoke on condition of anonymity.

Proponents of the approach are seeking a figure like former Coast Guard Admiral Thad Allen who took charge of the response to the BP oil spill in the Gulf of Mexico in 2010.

Until now, Tom Frieden, the head of the Centers for Disease Control, has been the face of the administration on Ebola. But the new domestic cases have forced him to backtrack from some early overconfident statements about the ability of the U.S. medical system to contain the threat.

The White House has resisted calls for a "czar" to pull together the international and domestic response to the disease, arguing that Lisa Monaco, Obama's homeland security aide, has been adeptly filling that role. A White House spokesman declined to comment late on Wednesday on whether that thinking has changed.

But lawmakers worry Monaco, who also plays a lead role coordinating U.S. efforts to combat Islamic State militants, has too much on her plate.

Over the past few weeks, the White House has sought to reassure the public by trying to strike a balance between demonstrating the administration is on top of the situation while not trying to feed a sense of public panic.

On Wednesday, that balance shifted. A second Texas nurse contracted Ebola from a patient who died from the disease.

The nurse had recently traveled by plane and officials began tracing a large network of people who may have had contact with her. The nurse had told the CDC she had a fever before she boarded the plane, but was not stopped from boarding, a federal source said late on Wednesday. Frieden earlier in the day told reporters she should not have been aboard.

The new infection contributed to a slide in the stock market.

Obama, who seldom changes his schedule, no matter what crisis is before him, canceled speeches and fundraisers in Connecticut, New Jersey, Rhode Island and New York.

He met with his cabinet for about two hours, and then told Americans that the risk of a widespread outbreak was very low.

Obama needs to make more such efforts to talk directly to Americans about Ebola to show he is in control, said Peter LaMotte, a senior vice president at Levick, a crisis communications firm.

"He needs to be taking a leadership role rather than letting the experts speak on his behalf," LaMotte said.

Rather than taking the symbolic step of appointing an Ebola czar, Obama should take a more forward role himself to explain the risks and urge calm, said Stephen Morrison, a senior vice president at the Center for Strategic and International Studies.

"The biggest danger here is public fear, and panic," Morrison said, noting there may be more cases of Ebola to come.

"The president, it seems to me, is the person who should be there, walking that line," he said.