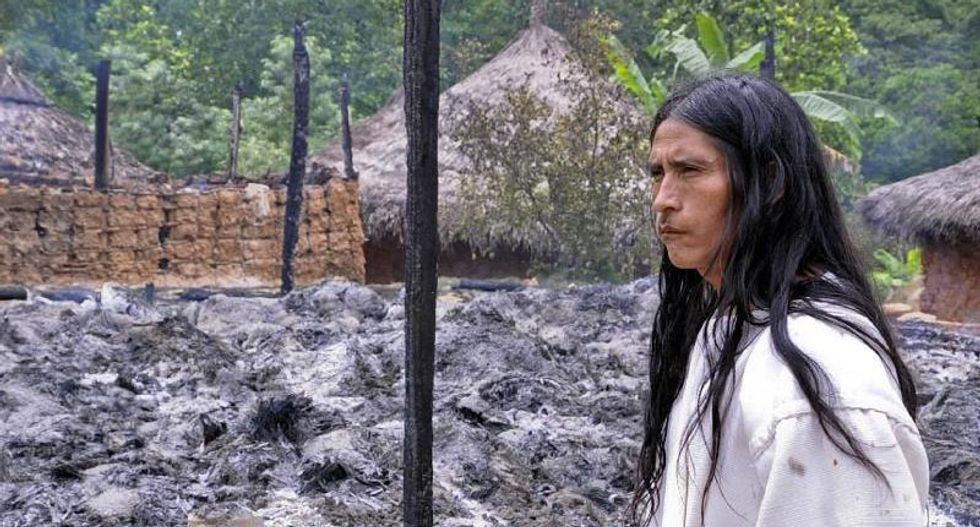 A picture released by the Defensoria del Pueblo shows a native from the Wiwa ethnic group looking at the the location of a lightning strike in Santa Marta, Colombia, on October 6, 2014 (AFP Photo/)

Eleven Wiwa Indians killed by lightning during a tribal ceremony in Colombia's Sierra Nevada mountains will be left unburied where they died according to their traditions, an official said Sunday.

The community of about 60 families will abandon their remote village in the wake of Monday's tragedy, but it was not yet clear where they would go, said Jose Gregorio Rodriguez, an advisor on the Wiwas at the National Indigenous Organization of Colombia, which represents the country's 800,000 indigenous people.

"The bodies will stay in the 'uguma' (ceremonial hut) where they died and the community will leave the site, as their customs and traditions dictate," Rodriguez told AFP.

The 11 men were killed on Monday when lightning struck the hut during a ceremony, also injuring another 20 participants who suffered second and third degree burns.

The Wiwas, a tribe that retreated into the Sierra Nevada of northern Colombia after the Spanish conquest, revere all aspects of nature and believe they are called to keep the world in balance.

Some villagers saw the devastating lightning strike as a spiritual blow in response to "man's turning his back on nature," Lorenzo Gil, a survivor, told AFP this week.

After the tragedy, the villagers held a long funeral ritual, whose first part concluded on Friday. A 10-day healing ceremony will follow.

"This rite is a healing for the people but also for the affected territories," said Rodriguez.

A day after the lightning strike that killed the Wiwas, another indigenous community in the Sierra Nevada, the Arhuacas, were hit by a landslide that killed six people, including five children.

"When the indigenous die as a result of tragic acts of nature, the community abandons the place to avoid other dangerous natural phenomena," said Rodriguez.