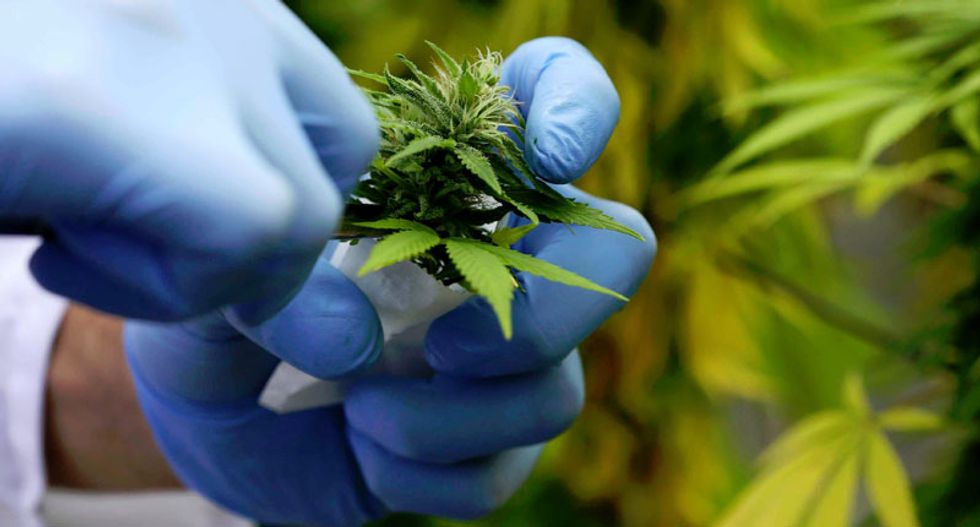 A production assistant collects a Cannabis plant in a state-owned agricultural farm in Rovigo, about 60 km (40 miles) from Venice, September 22, 2014. (REUTERS/Alessandro Bianchi)

Marijuana is illegal under federal law in the United States, but more than 300 attendees paid $500 each to attend the Cannabis Business Expo at a high-end hotel in Manhattan's Times Square, hoping to profit if it becomes legal by the end of the decade.

The expo this week failed to attract any large publicly traded consumer or agriculture companies that could benefit if and when pot gets the federal blessing, and drew a mixed crowd. One twenty-something man wearing a hat that read "Wake and Bake" stood beside a group of men in dark suits who would have been at home at any financial conference.

Not far away, a former broker at Stratton Oakmont, the Long Island, New York, brokerage at the center of a stock manipulation scheme that was the subject of the film "The Wolf of Wall Street," chatted with a former player for the New York Jets pro football team, about the prospects of marijuana-based biotechnology companies.

Twenty-three states and the District of Columbia currently allow some form of medical marijuana, while Washington and Colorado voted in 2012 to allow adults to consume marijuana without a prescription.

A handful of marijuana companies in the United States, including Medical Marijuana Inc, trade on the lightly regulated over-the-counter market.

"We think that in a few years you're going to look at cannabis as a commodity the same way that you look at corn or wheat," Steve Janjic, chief executive officer at Amercanex, one of several firms trying to create a wholesale commodities market for different types of marijuana, said in an interview.

In the display hall, exhibitors pitched everything from hemp-based pet food to security systems to dehumidifiers for greenhouses, and handed out swag, including "Where's weed?" chip clips.

Would-be entrepreneurs milled about, looking for ideas. One woman, who did not want to be identified, said she was planning to sell her Connecticut flower shop and invest more than a million dollars to open a marijuana dispensary in Denver.

While there are few legal ways outside of Colorado or Washington to cultivate or sell marijuana to the public, attendees focused on pot-related businesses that could establish a foothold now and grow if pot is legalized in more states.

“This is getting to be legal now, and no other industry in the world just wings it,” said Patrick Vo, the chief financial officer of Florida-based BioTrackTHC, explaining how the company’s software could allow business owners to track inventory from seeds to finished product. He then added, helpfully, “No customer of ours has ever been raided!”