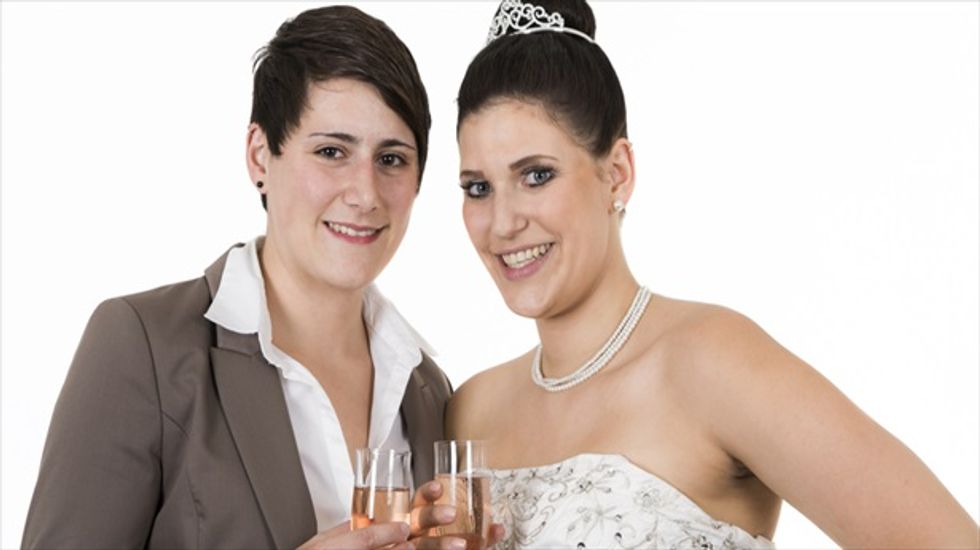 Barriers to gay marriage fell in Arizona, Alaska and Wyoming on Friday following a series of federal court actions in the latest in a series of legal victories for supporters of same-sex matrimony in America.

In Arizona, U.S. District Judge John Sedwick wrote in a ruling made public on Friday that the state's restrictions on gay marriage were "unconstitutional by virtue of the fact that they deny same-sex couples the equal protection of the law."

Same-sex couples in the state began getting married right away. In Phoenix, Kevin Patterson and David Larance rushed to a county clerk's office after the decision and were swiftly married in a ceremony just outside the building.

"I'm just overjoyed, it's been a long time coming,” said Patterson, a plaintiff in the Arizona case.

Separately, the U.S. Supreme Court rejected a last-minute request from Alaska seeking to block a ruling by a federal judge that struck down that state's ban, and a U.S. district judge overturned a gay marriage ban in Wyoming.

A state holiday in Alaska meant gay couples would not be able to apply for marriage licenses there until next week, nor were marriages expected to immediately proceed in Wyoming thanks to a temporary stay on the judge's ruling in order to provide the state time to pursue an appeal.

The court actions would bring to 32 the number of states that allow gay marriage, if the Wyoming ban is not placed on a more permanent hold by a higher court by Oct. 23.

Earlier this month, the U.S. Supreme Court surprised observers by leaving intact lower court rulings that struck down gay marriage in five states. A day later, the 9th U.S. Circuit Court of Appeals, which has jurisdiction over Arizona, found gay marriage bans in Idaho and Nevada were unconstitutional.

Arizona's attorney general said he would not appeal Sedwick's ruling because there was no chance of success, and gave the go-ahead for marriages to proceed.

"It is not only disappointing, but also deeply troubling, that unelected federal judges can dictate the laws of individual states, create rights based on their personal policy preferences and supplant the will of the people in an area traditionally left to the states for more than 200 years," Brewer said in a statement.

The judge who overturned Arizona's ban, after ordering the state in September to recognize the marriage of a gay man wed in California whose same-sex spouse later died, declined to put his ruling on hold.

In Wyoming, Republican Governor Matt Mead had said prior to Friday's ruling that the state should not appeal, according to local media. A spokeswoman for the governor did not return calls seeking comment. The Wyoming attorney general's office said he was traveling and not immediately available for comment.

(Reporting by David Schwartz; Additional reporting by Lawrence Hurley in Washington and Steve Quinn in Juneau, Alaska; Writing by Alex Dobuzinskis; Editing by Cynthia Johnston and Will Dunham)