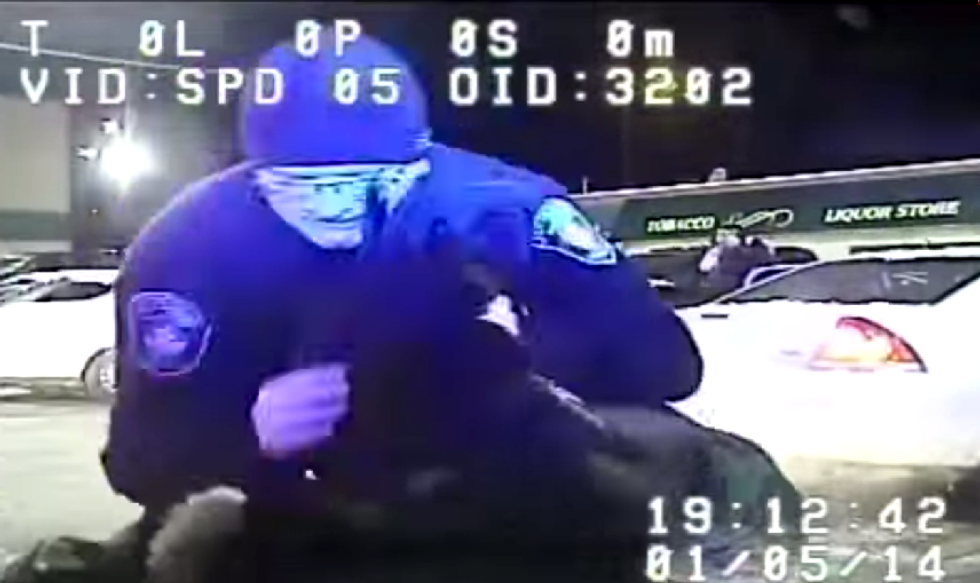 A white police officer in Superior, Wisconsin who grabbed a black woman by her hair and slammed her face into the hood of a car and punched her several times has received a single day's suspension from duty.

According to NorthlandNewsCenter.com, Officer George Gothner was not censured for his violent attack on Natasha Lancour, which took place on Jan. 5, but for swearing while he did it.

The decision came at the end of a lengthy internal investigation by the police force. The violent arrest was caught on camera and spawned a significant outcry.

Superior Police Chief Charles LaGesse said that the department has ruled that Gothner's use of force against the unarmed Lancour was consistent with his training and with the policies of the department.

On the night of the assault, Gothner and other officers had approached a group of people in the parking lot of a night club called the Keyport Lounge. In dashboard camera footage of the incident, Gothner can be seen shouting and Lancour and pointing into her face.

Then, Gothner dragged Lancour to the squad car by her hair, bounced her face off the hood, then proceeded to punch her in the face and head.

However, the Wisconsin Department of Justice investigation found, Gothner "failed to utilize proper communication skills and was vulgar and unprofessional in his initial contact with Lancour and his words were a violation of several department policies."

His punishment is to miss a single 10-hour shift without pay.

Gothner arrested Lancour on the night of the incident and charged her with assaulting a police officer and resisting arrest, although in the video, she is not struggling or resisting. The charges were eventually dropped.

Lancour's attorney, Rick Gondik said, "The system of how we judge officers has to change. We will not see anything come out situations like this as long as the cops are giving 'attaboys' to the abusive cops. We need to have an outside agency look at the use of force incidents and make a finding."

Chief Lagesse said in a statement, "Superior police department places great value on our relationship with the community. This trust has been eroded by the public perception of this incident and we will strive to win that back by living through the tenets of our mission statement."

Gondik said that he is planning a lawsuit against the city and is investigating the possibility of pursuing criminal action against Gothner.

Watch the video about this story, embedded below via NortlandNewsNow.com:

Watch the dashboard camera video of the arrest, embedded below: