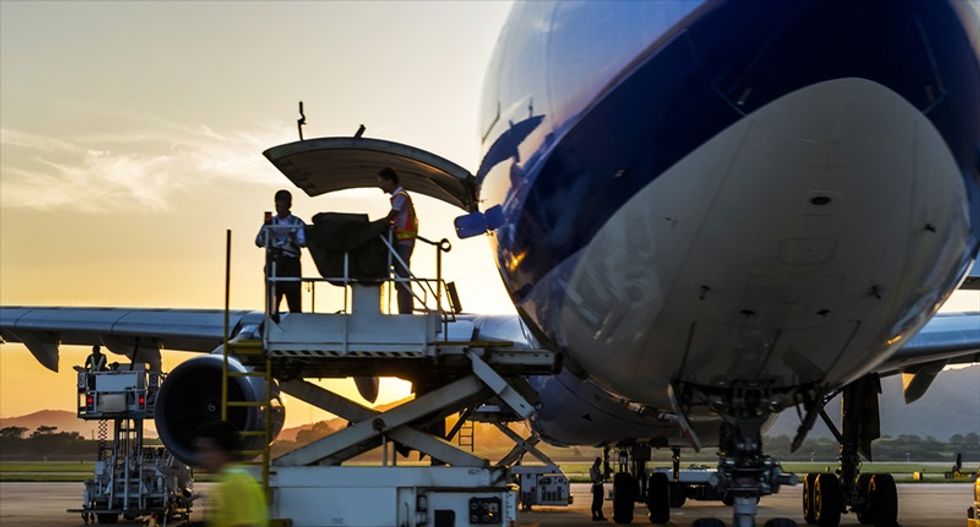 'Airplane Near The Terminal In An Airport At The Sunset' [Shutterstock]

U.S. airlines are suing the Port of Seattle to block planned pay increases for airport workers, in the latest legal battle over efforts to better compensate workers in a state with the highest minimum wage in the country.

On Monday, Airlines for America, which represents major air carriers, filed suit in district court in Seattle arguing the wage hikes conflict with state and federal law and labor agreements.

"The rules, unless restrained, will cause irreparable harm to Airlines for America's member air carriers," said the lawsuit filed by the industry group, which includes American Airlines Group, Delta Air Lines and United Airlines Inc along with delivery services United Parcel Service Inc and FedEx Corp..

The airlines' suit was joined by Baggage Airline Guest Services, an airport contractor that provides luggage handling and wheelchair escorts.

The Port maintains that commissioners acted within their authority when they passed the pay measure and said it was aimed at reducing employee turnover.

"We have worked closely with tenants and operators to hear concerns and provide guidance on implementing the policy," airport spokesman Perry Cooper said in an emailed statement.

Seattle is among several cities leading the way in a national push by Democrats and labor activists to raise wages well above the current federal minimum of $7.25 per hour.

Voters in the Seattle suburb of SeaTac - where the airport is based - approved an initiative last year enacting a $15 minimum wage for many workers, but airport employees were later excluded by a court order.

In June, Seattle's city council unanimously approved the $15 per hour minimum, marking the first time a major U.S. city committed to such a high base level of pay. Business groups, led by the Washington, D.C-based International Franchise Association, filed suit to block the city council's measure soon after it was passed. Washington has the highest statewide minimum wage in the country at $9.32 per hour. Only Washington D.C. has a higher minimum wage at $9.50.

The case involving workers at the Seattle-Tacoma airport is Air Transport Association of America, Inc. et al v. Port of Seattle et al in the United States District Court for the Western District of Washington, No. 2:14-cv-01733.