Americans freed by North Korea arrive in US 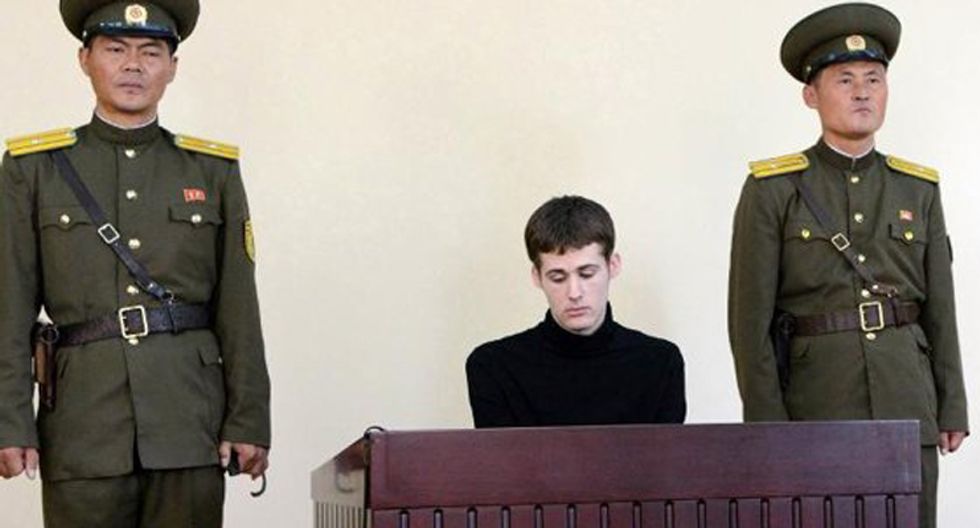 US citizen Miller Matthew Todd pictured at North Korean Supreme Court in Pyongyang on September 14, 2014 in a picture released by KCNA (AFP)

Two Americans released from lengthy prison sentences in North Korea arrived home, with one thanking supporters for never giving up on him.

The plane carrying Kenneth Bae and Matthew Miller touched down at around 9:00 pm (0500 GMT) at Joint Base Lewis-McChord in Washington State, following a secret mission by US intelligence chief James Clapper to secure their freedom.

Bae, a Korean-American missionary who has served two years in prison, expressed thanks to those who had been "supporting me and lifting me up and not forgetting me."

The men disembarked the US government jet with shaved heads and carrying luggage, then embraced family and friends on the tarmac.

In a brief press conference, Bae said he was also grateful to those "supporting my family as well during this tremendous difficult time," and asked for supporters to not forget "the people of North Korea."

President Barack Obama hailed the latest releases as "wonderful," as State Department officials said there had been no "quid pro quo" deal with North Korea to secure Bae and Miller's freedom.

US Director of National Intelligence Clapper traveled to North Korea and "engaged on behalf of the United States in discussions with DPRK authorities about the release of two citizens," a State Department statement said.

A senior administration official said Clapper carried a "brief message" from Obama to North Korean Leader Kim Jong-Un indicating he was his personal envoy to bring the Americans home.

"It was a skillful move on the part of the administration," former US envoy to the United Nations Bill Richardson, who negotiated with the North in the past, told CNN.

Obama, speaking just hours before leaving for a tour of Asia, praised Clapper's role in the "challenging" mission.

"I think it is a wonderful day for them and their families and obviously we are very grateful for their safe return," he said.

Former basketball player Dennis Rodman, who has talked up his cozy relationship with Kim, claimed his trips to the country had triggered Bae's release.

"I understand the crimes (Bae) committed, and ask you my dear friend, the highly respected Marshall Kim Jong-Un for his release to show my country how loving and compassionate you and the DPRK can be," Rodman wrote in a letter to the leader in January released by celebrity website TMZ.

Bae marked the two-year anniversary of his detention this week.

The sickly 46-year-old said Saturday he is "recovering at this time" when asked about his health.

Bae was arrested in November 2012 and sentenced to 15 years' hard labor.

His sister Terri Chung expressed joy at her brother's release.

"We finally are here. My brother is home. All of our hopes and prayers for this moment have finally come true," she said, speaking before Bae took to the podium.

"We're thankful that God never abandoned us even though the last years have been a journey that we wouldn't wish on anybody -- even when it seemed like there was no hope."

She said the family were also thankful "for the mercy of leaders in North Korea."

Bae was born in South Korea and his family came to the United States in 1985, his sister said.

Miller, 24, had been sentenced to six years' hard labor by the North Korean Supreme Court following his arrest in April, after he allegedly ripped up his visa at immigration and demanded asylum.

Washington had condemned Pyongyang over the detentions, saying the Americans were held as political hostages to extract diplomatic concessions.

North Korea has expressed interest in the past in reviving six-party talks with the US and others about its nuclear program, but Washington insists Pyongyang must first show a tangible commitment to de-nuclearization.

A State Department official insisted the release of Bae and Miller did not reflect a shift in posture over the mothballed nuclear negotiations.

"North Korea knows what it needs to do if it wants a better relationship with the international community and wants to end its isolation and pariah status," the official told AFP.

"North Korea must show it is serious and prepared to abide by its commitments, particularly concerning denuclearization. And they must take significant steps to improve their human rights record.

"The release of our citizens is unrelated."

As recently as Tuesday, North Korea was maintaining its defiant stance, ruling out dialogue with the United States about its nuclear program and human rights record and accusing the US of trying to destroy its system.

The North "will never allow any human rights dialogue or nuclear one with the enemy keen to overthrow it," a foreign ministry spokesman said through the official Korean Central News Agency.