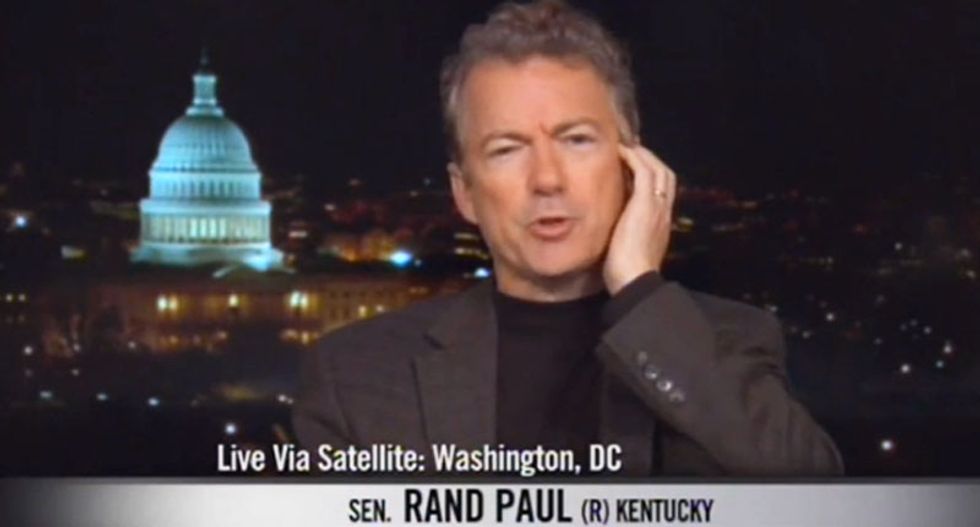 Host Bill Maher invited Kentucky Senator Rand Paul onto HBO's Real Time for a interview covering a wide range of topics, with the host telling the Republican that his vote -- as an independent -- is available providing Paul's responses on certain topics aligned with his own.

Maher began by pointing out that Paul was one of the few Republicans willing to go where Republicans wouldn't normally go, speaking before African-American audiences as well as appearing on Real Time.

Speaking from Washington D.C., Paul discussed restoring voting rights to felons with Maher, leading to a conversation regarding the failed war on drugs and the high cost of imprisoning non-violent drug offenders.

After Maher remarked that allowing ex-felons to vote "could increase turnout for Democrats,"  Paul related a story about an acquaintance who served time for growing marijuana 30 years ago.

"A friend of mine's brother thirty years ago grew marijuana plants in college, and apparently he had a green thumb, and he was very good at it, and he got a felony conviction," Paul explained. "But he can't vote, and for thirty years he's had to mark off a box on every application saying he's a convicted felon, and it's ruined his life. And I think of all of these kids, particularly poor kids in our cities who have no chance, can't afford bail, get pushed into a bad deal."

Paul concluded, "We've got a problems with criminal justice, most of it stems from the war on drugs."

Maher directed the conversation to the President Obama's carbon deal with China and acknowledged that Paul comes from "coal country," before telling the presumptive presidential candidate that with the right answer on climate change, "you could get independents like me."

"I am available to the Rand Paul campaign," Maher said. "But not if I don't think you're seeing this issue realistically."

Paul admitted that there is "abundant evidence that carbon is increasing and has been increasing," before adding, "All that I ask for is that the solution has to be a balanced solution, and that you have to account for jobs, and jobs lost by regulation. And I'm not against regulation, I think the environment has been cleaned up dramatically through regulations on emissions as well as clean water over the last forty or fifty years."

Rand continued on before depicting concerns over climate change as a "religiosity" at which point Maher interrupted him saying, "Okay, you had me, but now you're losing me."

Watch the video below uploaded to YouTube by popitup7: