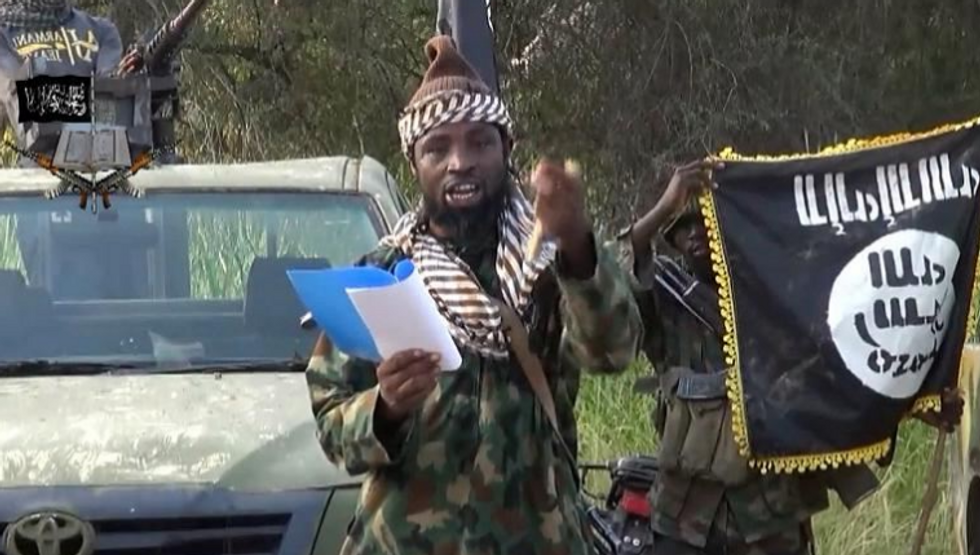 Suspected Boko Haram fighters stole dynamite and pick-up trucks from a French-owned cement works in Nigeria after robbing a bank, in a raid to fund and pursue their campaign of violence in the northeast of the African nation.

The attack in Ashaka, in Gombe state, on Tuesday came after the Islamists robbed a bank, blew up a police station and razed a political party office 20 kilometres (12 miles) away in Nafada.

Both incidents again demonstrated Boko Haram's apparent ability to strike at will and further punctured government claims that a ceasefire deal has been reached to end five years of bloodshed.

Boko Haram funds its operations in part through bank robberies and has previously stolen vehicles including armoured personnel carriers, weapons and ammunition from the Nigerian military.

Unlike previous attacks in recent months in the far northeast, the militants did not attempt to hold the town, leaving when they secured their loot.

French diplomats in Nigeria said none of its nationals was taken in the raid.

The head of the Lafarge group, Bruno Lafont, said operations had not been affected.

"The factory was the target of intruders. There were no injuries. There was no damage in the factory," he told reporters in Paris on Wednesday.

"This morning (Wednesday), the situation is still calm and everything is back to normal."

The Lafarge plant, set up in 1974, is the largest cement works in northern Nigeria and employs about 500 people, including an unspecified number of expatriates.

The gunmen stormed the site at about 3:00 pm (1400 GMT), according to one worker, Amadu Wunti, who said they looted high explosives and demanded to be taken to where expatriate managers stay.

Wunti identified the expatriates as French nationals but the Lafarge group said it did not comment on its foreign staff for security reasons.

At the time, the plant was mostly empty, with staff having run to safety when news spread that the gunmen were coming after the raid in Nafada, which left at least 10 dead, according to residents.

Locals Abubakar Galda and Awwal Ibrahim said five soldiers were killed at a checkpoint and four worshippers were shot dead at a mosque with the town's most senior cleric.

Wunti's account was supported by several others, including another staff member, who said: "They (the militants) pulled out after the raid. They did not hurt or kidnap anyone.

"But they took eight company vehicles and lots of dynamite used in quarry work. The attackers, which included young women, broke into the store and loaded dynamite into the vehicles and drove off."

Nafada is near the border with Yobe, a state under emergency rule since May last year because of the Islamist uprising and where Boko Haram is reportedly in control of several towns and villages.

The violence would be consistent with Boko Haram's recent pattern of striking south of their stronghold in the northeast, where it is attempting to carve out a hardline Islamic state.

The attack happened after a triple bombing at a bus station in the Gombe state capital, Gombe city, last week, which killed at least eight people and injured dozens of others.

Suspected militants on Sunday used dynamite to blast open a jail in the central state of Kogi, where Boko Haram prisoners have been held, allowing 132 to escape.

Bloodshed has continued across the north since the government claimed on October 17 that Boko Haram had agreed to a ceasefire.

Nigeria maintains that the truce is still viable, despite the continued violence and mounting death toll.

But most experts believe that the purported Boko Haram envoys supposedly in talks with the government have no ties to the group's real leadership.

Boko Haram leader Abubakar Shekau dismissed talk of a ceasefire as "a lie" in a video last week.