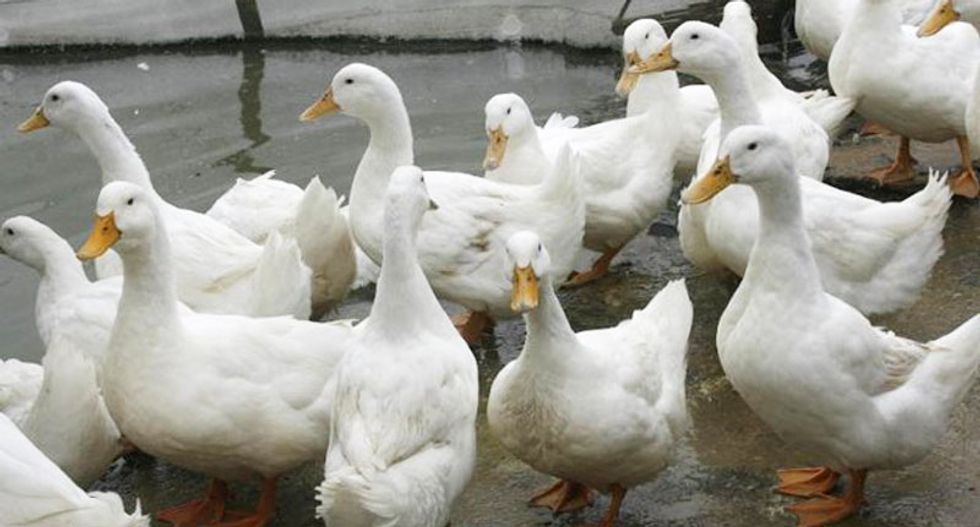 A duck breeding farm in northern England was closed off on Monday after an outbreak of bird flu, although officials said the risk to public health was "very low".

The Department for Environment, Food and Rural Affairs (Defra) said it might be linked to outbreaks in the Netherlands and Germany, but said it had yet to identify the strain, although the deadly H5N1 had been ruled out.

An estimated 6,000 ducks on the farm will be culled and a 10-kilometre (six-mile) restriction zone has been put around the site near Driffield in Yorkshire.

"We have confirmed a case of avian flu on a duck breeding farm in Yorkshire. The public health risk is very low and there is no risk to the food chain," a Defra statement said.

Any movement of poultry or products in or out of the protection zone is prohibited.

"Obviously we are asking farmers to be doubly vigilant in their biosecurity and look for any potential signs of disease in their flock," a spokesman added.

The government's chief veterinary officer, Nigel Gibbens, said officials were looking at any possible links to outbreaks of bird flu in the Netherlands and Germany.

"That will include looking at the risk from wild bird spread to our national flock," he told the BBC.

Dutch authorities on Sunday banned the transport of poultry nationwide after the discovery at a farm of the "highly pathogenic" form of avian influenza that is very dangerous to birds and can contaminate humans.

"The link to the disease that they found in Germany and the Netherlands is our most likely source and, on that basis, Public Health England has said with this strain there is not a risk to public health," Gibbens said.

"The people dealing with the birds directly, that's the highest risk, and we'll be working to make sure that they're protected with proper hygiene precautions as they're handling the birds.

"The main focus is to protect our bird flock rather than any risk to public health."

Avian influenza can be fatal for birds and poses a health threat to humans, who can become sickened by handling infected poultry.

"We have been able to rule out H5N1," the Defra spokesman said.