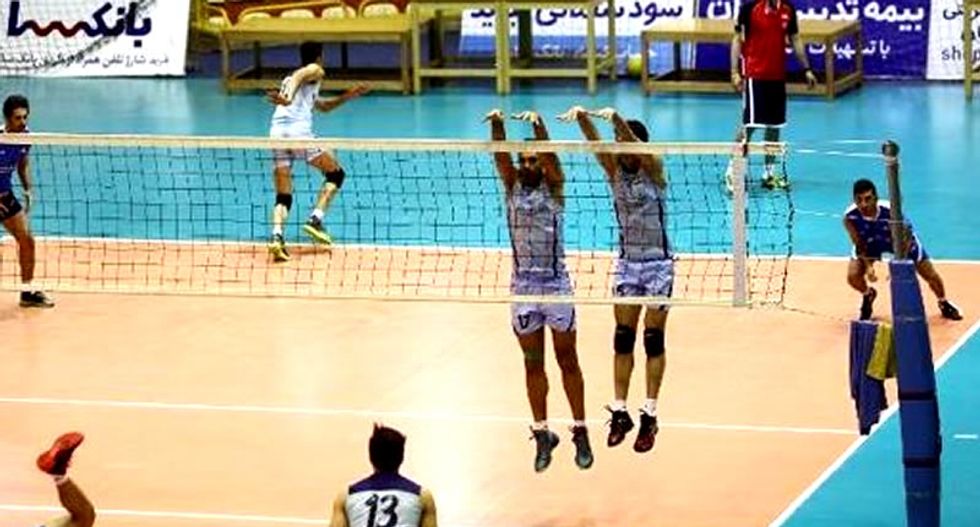 A Tehran court has jailed for one year a British-Iranian woman who was arrested after trying to attend a volleyball match, in a decision condemned Sunday as an outrage.

The case of Ghoncheh Ghavami, a 25-year-old law graduate from London, has drawn considerable attention because of her dual nationality and lengthy time in prison before trial. Britain said it was concerned after hearing reports of her jail sentence.

Ghavami was detained on June 20 at Azadi ("Freedom" in Farsi) Stadium where Iran's national volleyball team was to play Italy, after female fans and even women journalists were told they would not be allowed to watch, leading to a brief demonstration.

Women are also banned from football matches in Iran, with officials saying this is to protect them from lewd behaviour among male fans.

Ghavami was originally released after a few hours but was re-arrested days later at a police station she had visited to reclaim items confiscated from her near the stadium.

Having been in custody since -- at least 41 days of which was spent in solitary confinement, according to her family -- Ghavami went on trial behind closed doors last month.

"According to the verdict she was sentenced to one year in jail," her lawyer Alizadeh Tabatabaie was quoted in Iranian media as saying on Sunday.

No reason was given for the conviction though Ghavami had been accused of spreading propaganda against the regime, a broad charge often used by Iran's judiciary.

Asked if the sentence could be reduced, Tabatabaie, who has not been allowed to visit his client, said: "Considering that Ghoncheh Ghavami has no criminal record, the court can alleviate the verdict."

Britain's Foreign Office said it was concerned over the ruling and questioned the "grounds for this prosecution, due process during the trial and Miss Ghavami's treatment while in custody".

"It's an outrage that a young woman is being locked up simply for peacefully having her say about how women are discriminated against in Iran," said Kate Allen, the rights group's director for Britain.

"Ghoncheh is a prisoner of conscience and the Iranian authorities should quash the sentence and release her immediately and unconditionally."

So far, Ghavami has spent 126 days in the capital's notorious Evin prison. Last month she went on a hunger strike for a fortnight in protest at the conditions there.

A Facebook page where her friends and family have campaigned for her release features photographs of her against the slogan: "Jailed for wanting to watch a volleyball match."

Officials, however, have said Ghavami was detained for security reasons unrelated to the sporting event.

The most recent update on the Facebook account corroborated the one year sentence and also criticised the lack of transparency shown by the judiciary.

"A fair and just legal process according to Iran's legal framework is the basic right of every Iranian citizen. Why are these rights not upheld in Ghoncheh's case?" it said.

Britain currently has no diplomatic presence in Tehran but recently said that it intends to reopen its embassy in the Iranian capital soon.

Cameron underlined "the impact that such cases had on Iran's image in the UK," a Downing Street spokesman said at the time.

The verdict also comes with Iran under international pressure over its human rights record.

When Rouhani, a moderate elected last year, has been questioned about a soaring number of executions and detentions under his rule, he has said that the judiciary is independent of his government.

However, many diplomats at the UN Human Rights Council in Geneva last week voiced alarm at the situation of political prisoners, women and religious minorities in Iran.

They also decried arrests and harassment of journalists, forced confessions and lack of access to fair trials.

Mohammad Javad Larijani, secretary general of Iran's High Council for Human Rights, responded by saying his country had made great progress in the field in recent years.