Bryan Fischer: 'Freedom of Religion' in US is only a choice of which Christian church to join 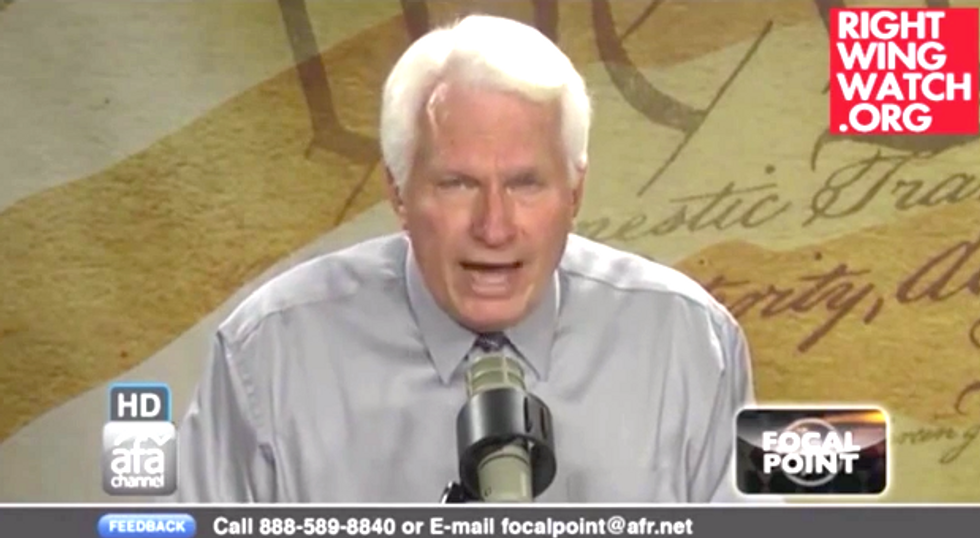 Conservative Christian pastor Bryan Fischer declared in a column for RenewAmerica.com that the First Amendment of the U.S. Constitution's guarantee of freedom of religion must only apply to Christianity.

Otherwise, he warned, Satanism will have to be recognized as an official religion.

Fischer was responding to the Orange County, Florida School District's decision to cease Christian indoctrination in public schools after the U.S. Satanic Temple asserted its right to do the same.

The Satanists established that it is unconstitutional to give representatives of one faith access to students and deny access to a separate faith. To open the public school doors to faith-based proselytizing opens the doors to all faiths, including atheists, Satanists, Muslims and Jews.

"This incident serves as a prime example of how the gross distortion of the First Amendment is destroying religious liberty and turning Christian literature into the educational equivalent of pornography," he wrote on Wednesday, "something that is considered so toxic it must be kept from the eyes of inquisitive students."

"I have written on numerous occasions that the purpose of the First Amendment," he said, "was only to protect the free exercise of the Christian faith and to prevent the selection and designation of one Christian denomination as the official church of the United States."

"Low-information educators" and "activist judges," Fischer said, have warped Americans' understanding of the First Amendment, making them believe that the U.S. Constitution gives equal weight to all faiths.

The Establishment Clause's statement that "Congress shall make no law respecting an establishment of religion," said Fischer, only means that the states can decide among themselves how to treat believers belonging to faiths other than Christianity.

"But now the Prince of Darkness, in our befuddled and historically ignorant fashion, has been given equal standing with the Creator of the universe," he lamented. "Can this possibly be what the Founders intended? Of course not."

Under Fischer's definition of freedom of religion, i.e., freedom for Christianity, "Orange County is perfectly free to authorize the distribution of Bibles and forbid the distribution of satanic literature. Perhaps the Founders knew what they were talking about."