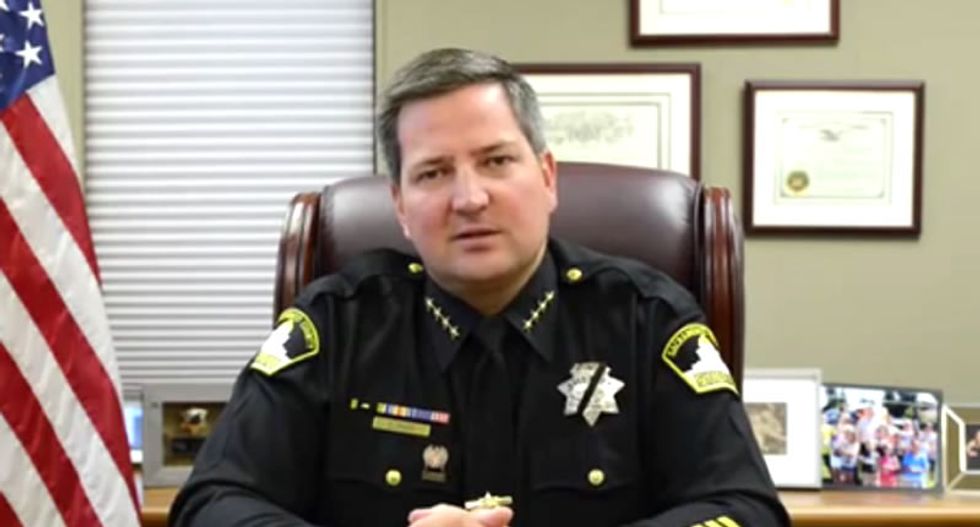 "Two weeks ago today," he began, "I had the unfortunate distinction of burying one of my deputies. His name was Danny Oliver, and he was shot a single time in the head during a casual encounter with a suspect," Luis Enrique Monroy-Bracamontes.

"During the ensuing manhunt, another deputy from an adjacent county was also shot and killed by him. In his rampage, he carjacked several people at gunpoint; he shot or shot at several other officers; and shot an innocent civilian in the face."

"Why am I telling you this?" he asked the president. "Because this person was in the country illegally. He has a significant criminal history, and on at least four prior occasions was removed from this county, each time having no consequences for his actions."

"And while I'm not going to over-dramatize this plea by attributing [Oliver's] death to you," Jones told the president, "I am going to implore you to address an issue only you can address -- immigration reform."

"I do not care which form of reform you choose," he continued, "pathway to citizenship, guest work program, or any of the other innovative programs that currently exist."

"But deferred action or amnesty is only deferring this crisis. It is not reform, it's simply giving up. It does nothing to make the immigrant population or America any safer."

"Please, do something," he pleaded. "Have the political courage to do what only you can do -- what you have a duty to do -- keep America and her people safe."

"I will make you this offer: if for whatever reason, you are unable or unwilling to effect the type of change that is necessary to keep America safe, simply reach out to me and I will get on a plane tomorrow, travel to Washington, and help you in whatever way I possibly can."

"An American patriot, Ronald Reagan, once told Russian President Mikhail Gorbachev to 'tear down this wall,' to preserve democracy and secure safety and freedom for a nation," Jones concluded.

"Mr. President, I'm asking you to build up that wall for the very same reasons."