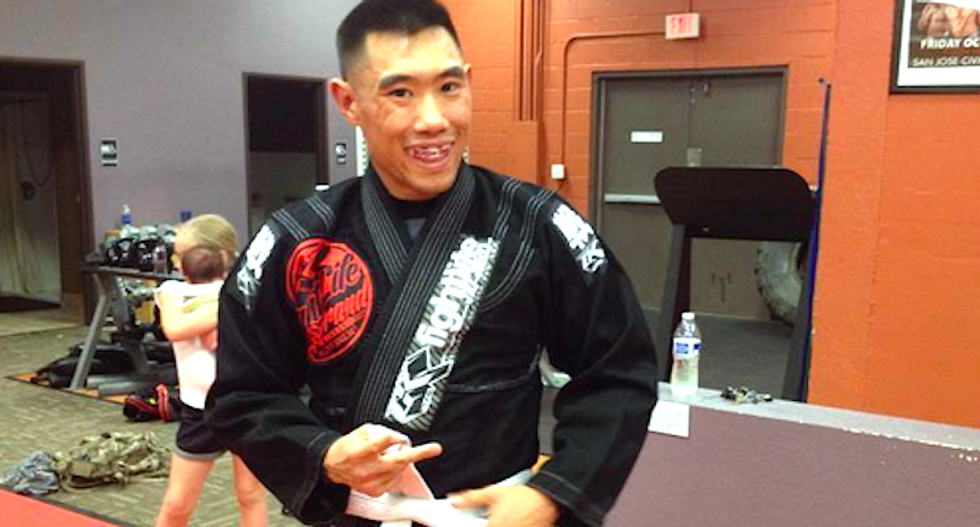 An Arizona police officer who trains as a cage fighter and had been disciplined numerous times during his career was allowed to resign after he incorrectly determined a woman was dead after he was asked to check on her.

Lenny Wong resigned from the Tucson Police Department on Sept. 18, nearly two months after he was called to the apartment of 74-year-old Joan Allman, reported KVOA-TV.

The officer said he saw flies and smelled a foul odor when he went inside June 19, and he found the elderly woman lying face down and unresponsive on her bed.

Wong said she was not breathing and appeared to be stiff, although he admitted to internal affairs investigators that he did not physically check the body before determining Allman was dead.

He told investigators he did not know how to check for a pulse, the station reported, although Wong completed First Aid Kit training in January.

Wong, who takes part in mixed martial arts fights under the name Lazer Lenny, called the medical examiner’s office and waited about two hours for an investigator to arrive.

Wong called the woman’s daughter, Mary Martin, but did not leave a message when she failed to answer.

"Her mother is in obvious distress and he doesn't even have the decency to leave a message for her daughter," said attorney Jeffrey Plyburn.

The investigator told KVOA he was processing evidence at the scene when he thought he saw the woman’s leg move.

Jimmy Rosario, the investigator, said he turned Allman over gently and began clearing her airway and placed an oxygen mask over her nose and mouth.

"It's one of those calls, I'll never forget as long as I live," Rosario said.

Allman was taken to a nearby hospital, where doctors determined she had suffered a stroke and broke her elbow, and she died July 8.

Wong could have done several things to help when he arrived at the apartment, Allman’s daughter said, starting with checking for a pulse.

“My goodness, that's the first thing you do,” the Phoenix woman said. “You're just going to look at her and say, ‘She looks dead to me?’"

The Tucson police chief said Wong’s actions were “just unacceptable” and did not represent proper training.

But he did not fire Wong, who had been suspended nearly 400 hours in his eight years with Tucson police.

Wong was suspended 240 hours for that excessive force case, although Chief Roberto Villasenor said he has since asked himself why he didn’t fire the officer at that time.

"I told him this is one of the most amounts of discipline I've seen anyone obtain in the this department, so we gave him that chance to try and prove himself and he did fine for a while," Villasenor said.

The woman’s daughter plans to file a claim against the city and its police department, and her attorney hopes the lawsuit will keep officers like Wong off the street.

"This guy's thrown a lot of interceptions and they kept putting him back in the game," Plyburn said.