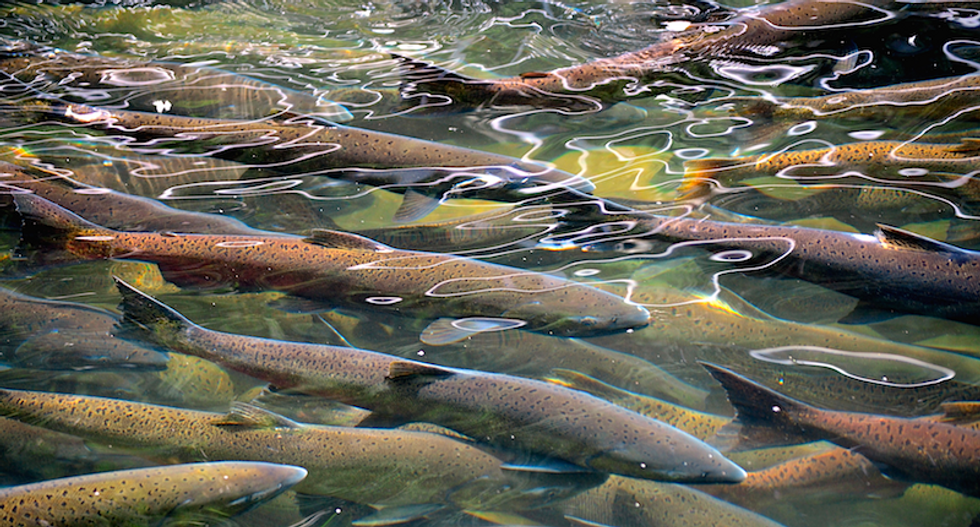 The annual fall migration of Chinook salmon has been delayed by warmer water temperatures and slow-flowing streams in parts of California as the state's three-year drought drags on, hatchery officials said Monday.

Cool November temperatures usually bring thousands of adult salmon from the Pacific Ocean into streams and rivers to spawn. But this year, fish have been slow to migrate up the American River to the state's hatchery near Sacramento, said William Cox, manager of the fish production and distribution program at the California Department of Fish and Wildlife.

"They haven't come into the river at the same time that they would normally," Cox said.

Wildlife researchers check the strength of the fall salmon run by going out to creeks and rivers and counting them. This year in the American River and its tributaries, the survey crews found just 210 corpses of salmon that had presumably spawned and died in the streams, a tenth of the number normally encountered, Cox said.

At another hatchery, near the Central Valley city of Merced, a higher than normal number of male salmon are arriving unable to provide viable sperm to spawn, he said.

State wildlife experts are not entirely sure why the salmon are late, but some speculate that warmer temperatures and slower flow in the American River might be to blame.

"Folsom reservoir is low and warm right now, so the water coming down isn't as cold as the fish prefer," said Kevin Thomas, a supervising environmental scientist with the state.

Gary Novak, who manages the Nimbus Hatchery, said the facility is still taking in its normal capacity of about 500 fish for each of its twice-weekly spawning activities.

During the season, from November to around December, hatchery workers open a gate in the water most Sundays and Tuesdays, allowing fish to swim inside where they spawn and the young are fed and raised to fingerling size and released.

The slow start to the salmon run does not mean that the fish are in danger, or that spawning will be reduced this year, Cox said. There are signs that more salmon are starting to make the trek upstream, and that could mean that the run is simply starting later, as the water cools down and fall rains swell the river.

"Chinook salmon are big fish, and they like to go where there's big water," Cox said.