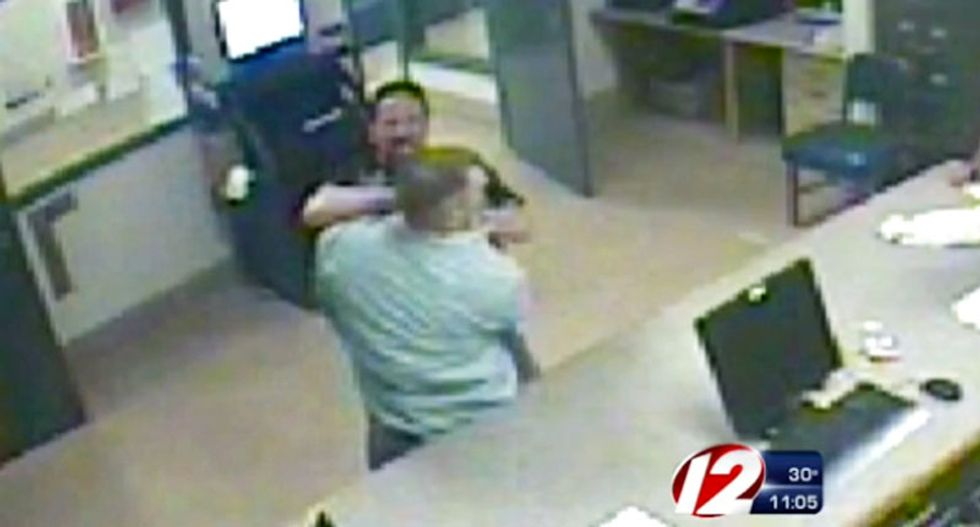 A Massachusetts police detective, with a history of assault complaints filed against him, is being investigated after video showed the officer attacking a suspect as he was being booked at police headquarters.

According to a report by WPRI, Detective Robert Kramer has used excessive force in multiple incidents dating back to 2007 that led to dropped charges more than once, and a lawsuit settlement payout in another case.

In the latest incident, Joseph O’Brien claims he was sitting on a stoop when Detective Robert Kramer approached him on the night of June 1, 2014.

In Kramer's incident report, he states O’Brien became an aggressor when he was approached that night, leading to his arrest for disorderly conduct. The incident reports that, while booking O'Brien, the suspect "immediately went after Detective Kramer,” after the handcuffs were removed.

However video obtained by O'Brien's attorneys shows O'Brien turning away from the detective who then throws an elbow into his head multiple times before wrestling him to the ground.

“I remember just looking down at the ground,” O’Brien said. “And I was getting kicked, punched. I got knee-bombed in the head.”

According to O'Brien, the confrontation continued away from the booking room cameras as Kramer taunted him, saying “there’s no cameras in here you (blank). Come on.”

Another inmate, Matthew Mendonca, corroborated O'Brien's story saying Kramer was "out of control."

An investigation by WPRI turned up multiple allegations against Kramer for using excessive force.

According to a statement made in court during a hearing for the O’Brien case, the city of Taunton paid a $65,000 claim for injuries suffered by Celinda Kaye following a 2007 incident. Kramer alleged Kaye interfered with a drug-related arrest, but the charges were dropped in 2008. Kaye claimed Kramer beat her, causing “multiple facial fractures, (and) two broken ribs.”

In 2011, Roberto Alvarez-Delgado claimed Kramer “assaulted (him) causing physical injuries.” According to Alvarez-Delgado’s attorney, the assault charges were dismissed on the day his attorney expected to get Kramer’s personnel file, following a motion that was granted by the judge in the case.

Another complainant, Ulises Saldana, stated Kramer threw him “to the ground and repeatedly kicked him.” Saldana was arrested for resisting arrest and is in the process of suing, according to his attorney Joseph Krowski, Jr., who said he was granted a motion to get Kramer’s personnel file.

“There are several complaints in the file,” Krowski said.

In a statement to the press, Taunton Police Chief Edward James Walsh called Kramer “a decorated and pro-active police officer,” before noting the detective was being reassigned pending "an internal review of the (O’Brien) incident and those listed in the Motion."

Watch the video below from WPRI: