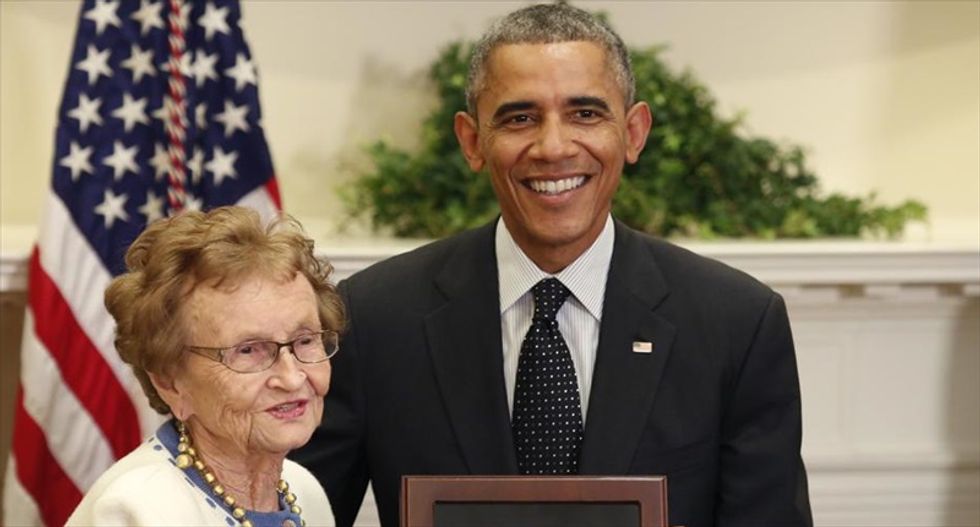 Helen Loring Ensign, 85, of Palm Desert, California receives the Medal of Honor from US President Barack Obama on behalf of Army First Lieutenant Alonzo Cushing at the White House in Washington, DC on Nov. 6, 2014. Photo by Yuri Gripas for Agence France-Presse.

An American soldier whose last stand heroics helped alter the fate of his country 151 years ago was awarded the nation's highest military honor Thursday by President Barack Obama.

The Medal of Honor was posthumously awarded to First Lt. Alonzo H. Cushing for ordering his artillery battery to continue firing its cannons during a pivotal all-out assault in the American Civil War.

Cushing was cool and competent under fire and said he would "fight it out or die in the attempt" as 10,000 southern rebels charged his position, Obama said during the award ceremony at the White House.

The 22-year-old kept directing cannon fire despite being shot twice in the stomach and shoulder. He would die during the attack in 1863.

Obama said the award was an acknowledgement of one of the "thousands of unknown young soldiers, committing unsung acts of heroism" who saved the nation during the country's internal conflict.

Half-a-million soldiers were killed in the American Civil War, that saw the northern states triumph over the slave-owning south, ending slavery in the U.S.

"I’m mindful that I might not be standing here today, as President, had it not been for the ultimate sacrifices of those courageous Americans," Obama said.

A distant relative of Cushing received the award on behalf of the solider at the ceremony. Historians had worked for 25 years for Cushing to receive the award.

Cushing was born in the U.S. state of Wisconsin and graduated from the country's military academy, West Point.

He fought at a number of major battles during the Civil War before facing his greatest test at the three-day Battle of Gettysburg in Pennsylvania in July of 1863.

Cushing's heroism came during 'Pickett's Charge' an all-out assault on the last day of the battle that was perhaps the most pivotal in the war.

The attack ordered by Confederate general Robert E. Lee and fought off by Union troops marked a turning point during the Civil War and was a high-water mark of the southern state rebellion.

Wounded, Cushing helped fire the guns himself, burning his thumbs to the bone before falling dead next to his cannon.