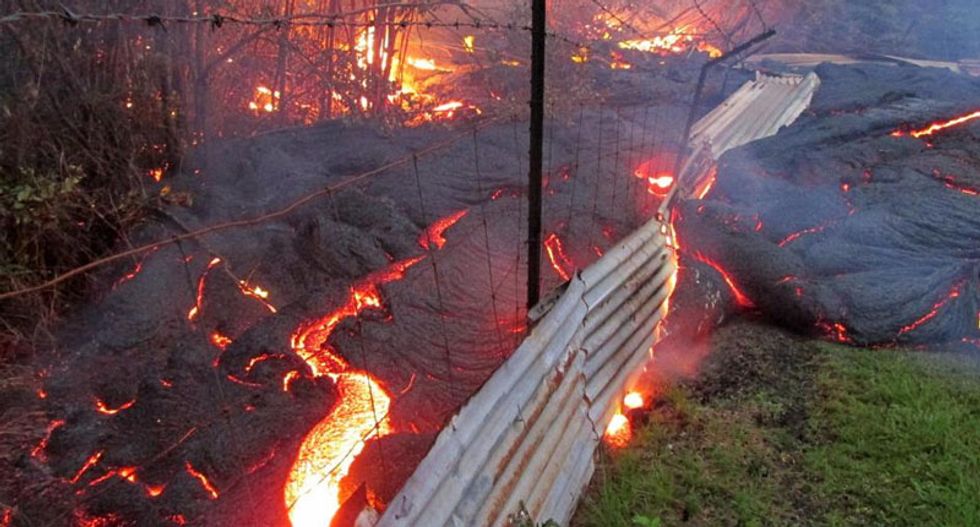 Lava from the Kilauea volcano in Pahoa, Hawaii overcomes a fence marking a private property on October 31, 2014 (AFP Photo/)

She might be a US congresswoman, but Tulsi Gabbard is also a reservist in the National Guard, which placed her on active duty to help with a volcanic eruption in her native Hawaii.

Gabbard, a military police captain in the Hawaii Army National Guard, has been called up "to support their assistance to Hawai'i County's response to the ongoing Kilauea lava flow," her spokeswoman Heather Fluit said Monday in a statement.

"Her activation starts tomorrow (Tuesday)" and lasts for an undetermined period of time, Fluit told AFP.

Gabbard will join about 80 National Guard soldiers and airmen already on the ground.

While on duty Gabbard will be unable to comment on her official congressional activities, presumably including on Tuesday's midterm election for all 435 seats in the US House of Representatives, and for which she is running to keep her seat.

Red-hot lava from a slow-erupting volcano has reached a home on Hawaii's Big Island and is threatening the entire town of Pahoa, on the eastern tip of the island, emergency officials said.

The lava flow has slowed in recent days, but it remains an emergency and Hawaii Governor Neil Abercrombie has requested a Presidential Disaster Declaration to unlock federal resources to help local emergency measures.

According to the Honolulu Star newspaper, non-residents are barred access to the flow, and barricades have been installed and are guarded by National Guardsmen.

Gabbard, 33 and an accomplished surfer, is a first-term congresswoman. While she has conducted annual National Guard training, "this is her first activation since she's been in Congress," Fluit said.