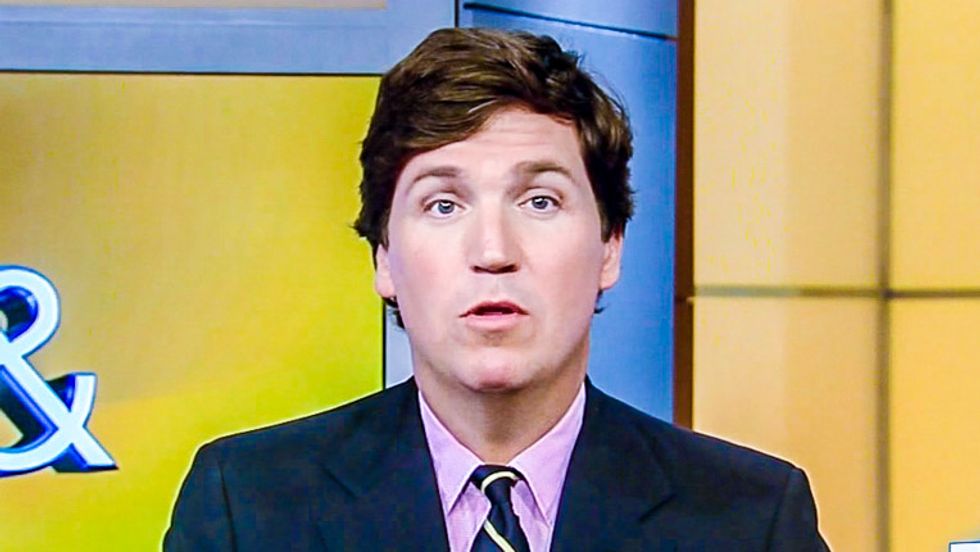 Fox News host Tucker Carlson found out the hard way this week that not all conservatives were happy that he was using his Daily Caller website to objectify women.

During a live Tuesday interview with conspiracy theorist Alex Jones, a caller named Mary from Pennsylvania told Carlson that his website was an "aberration in conservative media in terms of the disrespect towards women."

"It's an essentially in a race to the bottom with the left with its policy of contributing to over-sexualized atmosphere that we have," she added.

"Hold on a minute!" Jones interrupted. "Are you joking? I don't think anybody accuses The Daily Caller of -- I think Tucker gets accused of being almost too liberal sometimes. Now, you're saying he's attacking women? Is being a man period attacking women?"

Mary pointed to slide shows of "sexy girls" that Carlson's website featured on a daily basis.

In fact, a search for "hot women" or "sexy women" on The Daily Caller's website returns thousands of results, including slide shows of "Hot Women Eating Cereal" and "Hot Nurses" without Ebola.

Over and over again, from reports about the global economy to stories about mob bosses, The Daily Caller has found ways to insert photos objectifying women.

And in its more serious reporting, the website has been accused of staging sexist attacks on former Obama staffer Stephanie Cutter, Rep. Michele Bachmann (R-MN) and others.

"What's wrong with that?" Jones shouted at the caller on his Tuesday radio show.

"As a man that has been married 23 years and has three daughters, I like women better than men," Carlson opined. "But I also believe that beauty is important, and we're not embarrassed to put things that are beautiful -- not necessarily sexual or debased."

"There's nothing wrong with a woman in a swimsuit!" Jones exclaimed. "Ma'am, are you upset when you see a woman in a bathing suit on CNN?"

"When they're trying to sell products and prostituting themselves out in that way, of course," Mary replied.

"Our female readers are some of the biggest consumers -- or repeat readers of our slide shows," Carlson insisted.

"It's the women that are looking at it!" Jones agreed. "Ma'am, I appreciate your call, but I'm going to be honest, I think that was a seminar caller. And I never say that, but I really do just think that was just a cheap shot by some writer at -- give me a break."

"We mean it in a very lighthearted way, and there's nothing serious or creepy about it at all," Carlson said.

"Just don't show slide shows of guys in underwear," Jones grumbled. "Don't show that. Now that, I agree, is sexist. And I'm against it."

"We would never do that, ever," Carlson promised.

Begin watching the video below at the 34:30 mark.