Control of US Senate hinges on a handful of close races 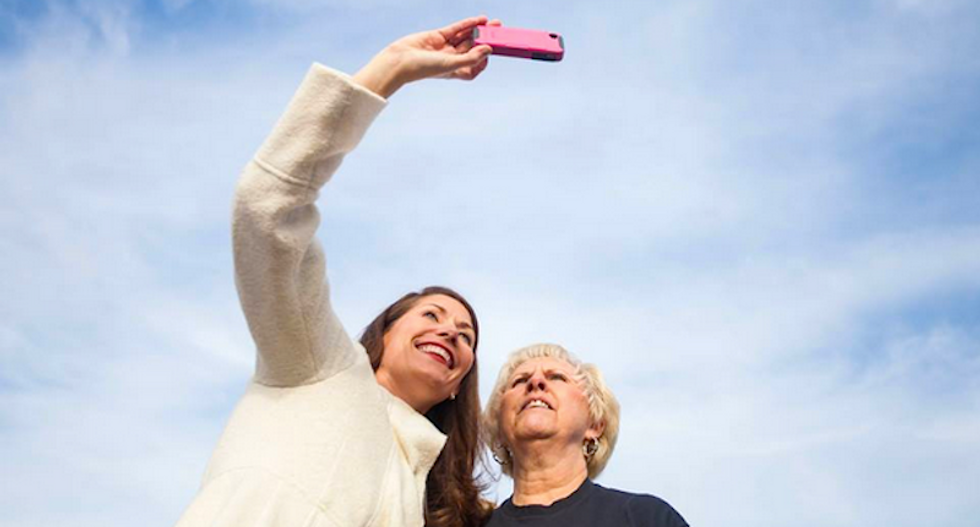 Alison Lundergan Grimes takes a selfie with a supporter (Facebook)

American voters will decide which party controls the U.S. Senate in Tuesday's elections, and at least 10 competitive races are still considered too close to predict a winner.

Thirty-six of the 100 Senate seats are at stake in the midterm elections, which are held halfway through the four-year presidential term. Republicans must pick up six more seats from Democrats to reclaim a majority.

All 435 seats are up for election in the House of Representatives, where Republicans are expected to expand their majority, and governors will be chosen in 36 states.

Here are the key Senate battlegrounds:

First-term Democratic Senator Mark Begich is trying to hold off Republican Dan Sullivan, a former state attorney general. Begich has touted his deep roots in the state, where his father was a congressman, and painted Sullivan, born in Ohio, as an outsider.

Michelle Nunn, daughter of popular former Senator Sam Nunn, is battling to pick up a seat for Democrats against Republican David Perdue, a former chief executive of Dollar General, in the race to replace retiring Republican Senator Saxby Chambliss. Libertarian Amanda Swafford could pick up enough votes to force the race into a Jan. 6 runoff if no candidate gets more than 50 percent of the vote.

Republican Joni Ernst is seeking to become the first woman to represent Iowa in the Senate by defeating Democratic Representative Bruce Braley, a four-term congressman, in one of the country's hardest-fought races. They are vying to replace retiring Democrat Tom Harkin.

Three-term Republican Senator Pat Roberts is struggling to survive an unexpectedly strong challenge from independent businessman Greg Orman. Democrat Chad Taylor dropped out of the race to clear the way for Orman. Republicans have held the two Senate seats in Kansas since 1939.

The top Republican in the Senate, Mitch McConnell, is seeking re-election to a sixth term against Kentucky's Secretary of State Alison Lundergan Grimes. Democrat Grimes refused to say during the campaign whether she voted for Obama in 2012.

Three-term Democratic Senator Mary Landrieu is fighting for her political life against Republican Representative Bill Cassidy. A third candidate, Tea Party-backed Republican Rob Maness, also is in the race, and a Dec. 6 runoff would be needed if no candidate gets more than 50 percent.

Republican Scott Brown, a former senator from Massachusetts, moved to New Hampshire to take on Democratic Senator Jeanne Shaheen, who was elected in the 2008 Democratic wave that brought Obama to the White House.

In the most expensive Senate race, Republican Thom Tillis, the speaker of the North Carolina House, is trying to unseat first-term Democratic Senator Kay Hagan by painting her as a rubber stamp for Obama.