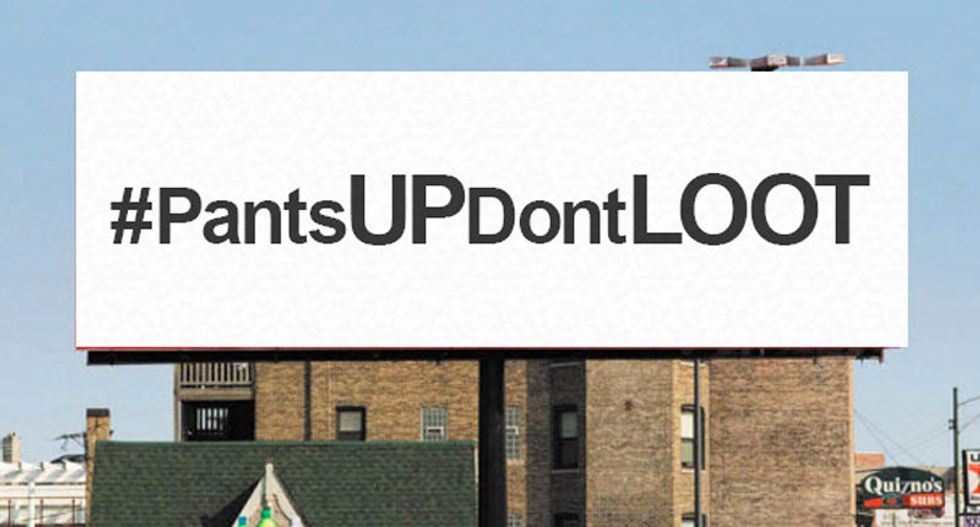 A Tennessee supporter of Officer Darren Wilson, the Missouri policeman who shot and killed unarmed teenager Michael Brown, has successfully crowdsourced enough funds to pay for at least one billboard near the race-torn town of Ferguson, reading #PantsUPdontLOOT.

Don Alexander of Brentwood, Tennessee, has raised over $3000 to place a billboard "in the Ferguson, MO area," featuring the phrase intended to mock the Ferguson protester's chant of "hands up, don't shoot," in reference to bystanders assertion that Wilson shot Brown while he had his hands up.

The community of Ferguson is currently awaiting a grand jury decision on whether Wilson will face charges in the killing of Brown.

The origin of the "pants up" phrase comes from a National Review article by Ryan Lovelace, decrying the violence in Ferguson that drew a militarized police response. The phrase also plays on stereotypes of young African-American men as "thugs" with drooping pants.

On his Indiegogo page, Alexander wrote, "This crowdfunding campaign is for the purchase of a billboard in the Ferguson, MO area. The billboard will display black text on a white background with the text "#PantsUPDontLoot"."

According to Alexander, the cost to create and keep the billboard up for one month is in the $2,500 range, adding, "Whatever funds we receive will go directly to keeping the billboard campaign up as long as possible. If we come to an agreement with a company and can fund it for 3 months, 5 months, 7 months..., we will."

Alexander claims that the selection of the billboard company is being kept secret, saying, "... we have to keep the exact billboard/company undisclosed because the companies we choose are being targeted with the intention of shutting us down and making it impossible for the project to move forward."

According to Gawker, Alexander was assisted in raising the existing funds with the help of social media, and commenters on St. Louis Coptalk, a comment board for area police officers and their supporters.

The crowdfund page was initially launched on Oct. 28 with a goal of $3,000. The funding period is slated to close of Dec. 17.