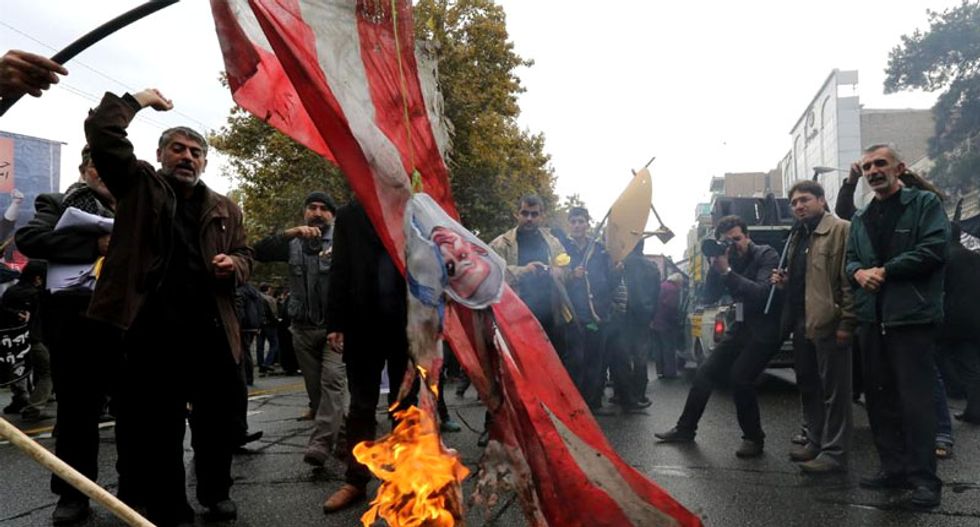 Iranians burn US flags outside the former US embassy in Tehran on November 4, 2014 (AFP Photo/Atta Kenare)

Several thousand Iranians gathered outside the former US embassy in Tehran on Tuesday to mark its storming by students 35 years ago, burning the American flag.

In what has become an annual spectacle, demonstrators chanted "Death to America" and "Death to Israel, Death to Britain."

This year's gathering coincided in Iran with Ashura, the commemoration of the killing of Imam Hussein and one of the holiest days in Shiite Islam, the country's predominant faith.

The crowd of 2,000 to 3,000 demonstrators was older and bigger than in recent years mostly because of the religious event being a public holiday.

The annual anniversary of the embassy's fall, when Islamist students climbed its walls and took diplomats hostage in 1979, is predominantly marked by youths.

The students were supporters of the conservative Muslim cleric Ayatollah Ruhollah Khomeini, whose return from exile in Paris in February 1979 ushered in Iran's Islamic revolution and the cutting of all diplomatic ties between Washington and Tehran.

The past year has seen a thaw however, with US Secretary of State John Kerry and Iran's Foreign Minister Mohammad Javad Zarif meeting regularly in talks aimed at a comprehensive deal over the Islamic republic's nuclear programme.

"That is diplomacy, but I am here to mark the oppression, cruelty and injustice of America," said Hamed Kargari, a 24-year-old student, when asked if the nuclear talks made this year's protest less relevant.

On Tuesday, politics was secondary as the black flags held in reverence to Imam Hussein in Tehran greatly outnumbered the "Down with USA" and "Down with Israel" placards on display.

After readings of the Koran were broadcast over loudspeakers in the capital, many in the crowd starting to cry in mourning for Hussein, killed by the army of the Caliph Yazid at Karbala in 680 AD in one of the formative events in Islam's Shiite-Sunni split.