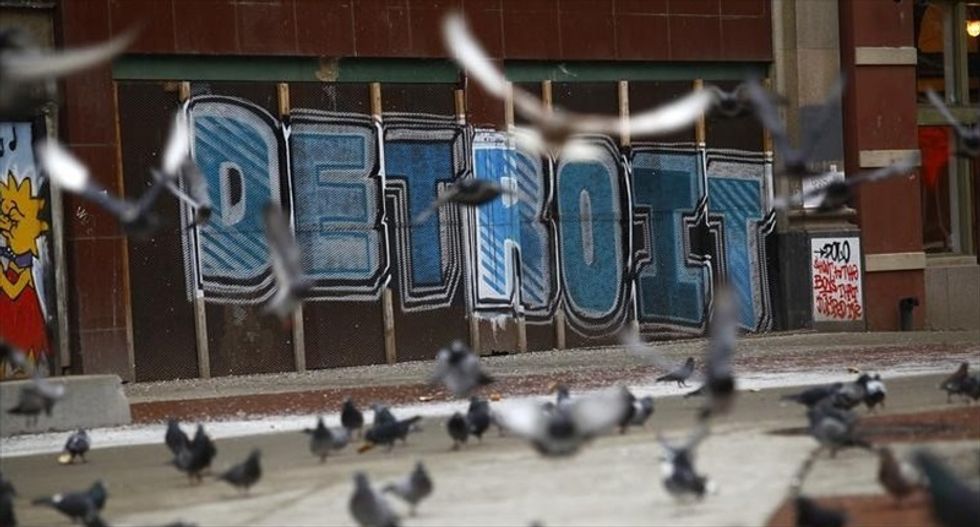 Pigeons are seen near graffiti in Detroit, Michigan on Dec. 3, 2013. Photo by Joshua Lott for Reuters.

Detroit won U.S. Bankruptcy Court approval on Friday for a road map to end its fiscal free fall and revitalize a city sinking under a huge debt load and dysfunctional government.

Judge Steven Rhodes approved the city's plan to shed about $7 billion of its $18 billion of debt and obligations and plow $1.7 billion into improvements, finding it both fair to creditors and feasible to implement.

"The city has worked honestly, diligently, and tirelessly to accomplish precisely the remedy that the bankruptcy code establishes for municipalities," Rhodes said in the ruling he read from the bench.

He acknowledged the anger the bankruptcy fueled among many Detroit residents and urged them to look forward.

"And so I ask you, for the good of the city’s fresh start, to move past your anger. Move past it and join in the work that is necessary to fix this city," he said.

He also called Detroit's inability to provide adequate services to its residents "inhumane and intolerable," saying that the city's plan aims to fix that problem.

Once the proud symbol of U.S. industrial strength, Detroit fell on hard times after population loss, rampant debt and financial mismanagement left it struggling to provide basic services to residents. During the 15-1/2-month bankruptcy process, the city's historic collection at the Detroit Institute of Arts (DIA) came into play as a potential pot of assets to satisfy creditors.

The journey through Chapter 9 municipal bankruptcy began on July 18, 2013, with major creditors girding for battle, and has wound down in a flurry of settlements. A so-called Grand Bargain taps in to $816 million from foundations, the DIA and the state of Michigan to ease pension cuts and protect city-owned art work from sale.

In his ruling, Rhodes said that settlement, which was key in winning the support for the plan from Detroit's two retirement systems and scores of city workers and retirees, "borders on miraculous." Bigger cuts to retiree healthcare were justified because that benefit, unlike pensions, was not protected under Michigan's constitution, he said.

However, a deal that granted unsecured holders of the city's unlimited tax general obligation bonds a 74 percent recovery was possibly at the top range of reasonableness, Rhodes said. He also noted that bond repayment can no longer be the only top budget priority in Michigan ahead of pensions.

"It's a milestone for municipal credit risk. If we look back over the past 50 years, this stands out as evidence that municipal bonds are not risk-free."

Two companies that guaranteed payments on Detroit bonds and were the last major holdout creditors in the case, Syncora Guarantee Inc and Financial Guaranty Insurance Co, received options to develop parcels of land. Rhodes imposed the plan on two classes of miscellaneous creditors.

With the cost of Detroit's consultants and lawyers topping $140 million, Rhodes said a process will be established to determine if those fees are reasonable.

"While today marks an incredible accomplishment, there is still much work to be done, and my team and I remain focused on seeing our job through to its completion," Orr said in a statement.

Duggan, at a news conference following the ruling, took issue with Rhodes' concern that it is a possible conflict of interest for the mayor and a member of the city council to have a seat on a nine-member, state-created oversight board for a post-bankruptcy Detroit.

"I am going to sit on that financial review commission to make darn sure that every single document they ask for, every single concern they raise is responded to promptly by the city of Detroit," Duggan said.

Michigan Governor Rick Snyder, who authorized the bankruptcy, also noted at the same news conference that much work remains to be done. "We need to redouble our efforts on the neighborhoods, to make Detroit a place where people want to raise their families."