'Down with Martelly!': Thousands of protesters demand Haitian president resign over election delays 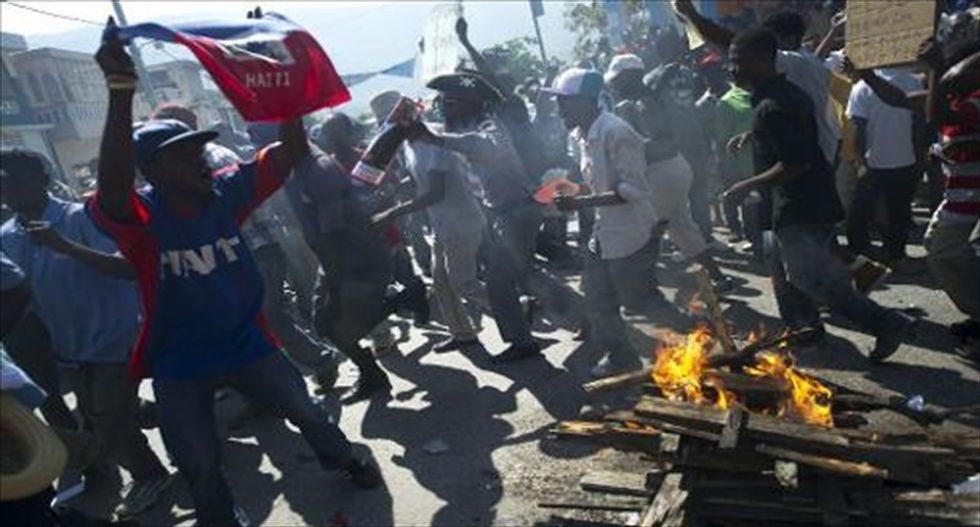 Thousands of angry protesters took to the streets of Haiti Friday to demand the resignation of President Michel Martelly, in the latest public outcry over long-delayed elections in the troubled Caribbean nation.

Haiti has been in political crisis for three years over the failure to hold municipal and legislative elections.

If elections are not held before January 12, parliament will be automatically dissolved and Martelly can rule by decree.

Demostrators called for both Martelly and Prime Minister Laurent Lamothe to step down, accusing them of mismanagement.

"Down with Martelly! Down with Lamothe, chief of corruption! They have to go!" chanted the protesters, who gathered at government headquarters in central Port-au-Prince.

Several main roads were blocked as protesters piled rocks in the streets, overturned trash cans, and burned tires and barricades.

Multiple demonstrations have been staged in recent weeks and police have arrested several people, sparking further ire from the crowds.

"We are here to demand freedom for the women who were arrested in anti-government protests and are being held without trial," said one protester.

"We demand the departure of this administration and the organization of free, honest and democratic elections," said another demonstrator.

The protests come one day after more than 20 opposition groups spoke out against the long election delays and condemned any moves by Martelly to rule by decree.

"We are alarmed by the risk of a political vacuum when parliament closes on January 12, 2015, as none of the planned elections have been held over the last three years," the group said in a statement.

A source close to the government said Martelly was expected to make a statement on the political crisis, though the timing was unclear.

The president has vowed to call elections early next year if the impasse is not resolved.

Recent talks initiated by the government aimed at resolving the crisis before the end of the year were boycotted by opposition parties.