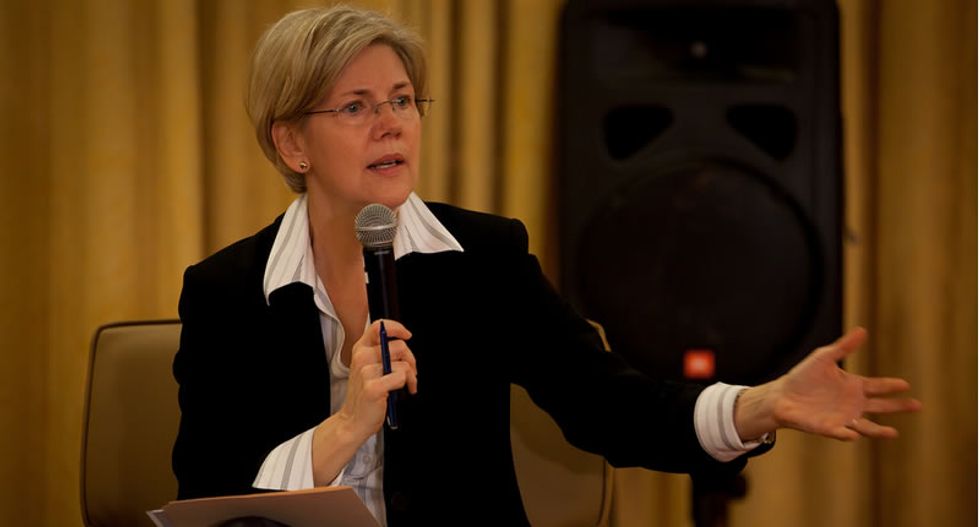 U.S. Senate Democrats expanded the ranks of their party leadership on Thursday to include Senator Elizabeth Warren, a leader of the party's liberal wing and a possible presidential contender in 2016.

Democrats, who lost control of the Senate in last week's midterm elections, created a new post for Warren as a strategic policy adviser to help the party bolster its appeal to the middle class.

The Massachusetts senator, a rising party star, spearheaded the creation of a consumer financial protection bureau after the 2008 crisis and has been a frequent critic of Wall Street and big banks.

"I think Senator Elizabeth Warren, as much if not more than any other senator, drives Wall Street crazy," said Senator Richard Durbin, the Democratic whip. "She is smart, she is effective, she knows how to deliver a message that really resonates with working families."

The announcement came after Senate Democrats and Republicans met in separate closed-door huddles to choose party leaders for the new Congress, which will begin in January. Both parties re-elected the same slate of top leaders.

In the House of Representatives, Republicans also voted to keep their leaders, nominating John Boehner as speaker and choosing Kevin McCarthy as majority leader and Steve Scalise as majority whip. House Democrats will choose their leaders next week.

The speaker is elected by the entire House. That vote will take place when the new Congress convenes in January.

Senate Democrats re-elected Harry Reid, who is now majority leader but will become minority leader in the new year. No tally was given, but there were at least two votes against Reid, from Senators Claire McCaskill of Missouri and Joe Manchin of West Virginia.

"It can’t be personal," Manchin said. "Harry Reid is a good man. I just felt we needed a leadership change." Democrats lost at least eight Senate seats in the midterm elections last week.

Senate Republicans unanimously chose current Minority Leader Mitch McConnell of Kentucky as their majority leader for next year. McConnell and Reid will switch titles in January when Republicans gain political control of the Senate.

Republican Senators John Thune of South Dakota, John Barrasso of Wyoming and Roy Blunt of Missouri will stay in their leadership posts, as will Democratic Senators Charles Schumer of New York and Patty Murray of Washington.