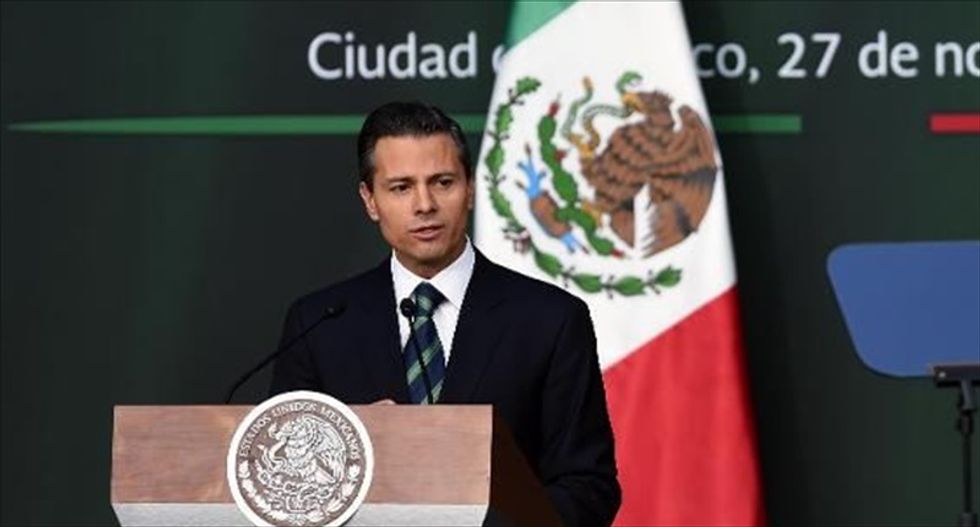 Mexican President Enrique Peña Nieto speaks about a new program against corruption at the Palacio Nacional in Mexico City on Nov. 27, 2014. Photo by Alfredo Estrella for Agence France-Presse.

Mexico's embattled president unveiled sweeping reforms Thursday to dissolve corruption-plagued municipal police forces nationwide amid an outcry over the role of gang-affiliated authorities in the presumed slaughter of 43 students.

More carnage hit Mexico hours before President Enrique Peña Nieto's announcement, with the discovery of 11 beheaded bodies in the troubled southern state of Guerrero -- the same region where the students were attacked in September.

"Enough is enough," Peña Nieto said, acknowledging the anger of Mexicans who have joined a wave of protests over a case that has highlighted the country's struggle with police corruption.

"Mexico must change," he said in a speech at the National Palace before congressmen, governors and civil society groups.

Peña Nieto said he would send a set of constitutional reforms to Congress on Monday that would allow federal authorities to take over municipalities infiltrated by drug cartels.

He said the measures also include the dissolution of the country's 1,800 municipal police forces, "which can easily be corrupted by criminals."

Police duties would be taken over by state agencies in each of the 31 states and the federal district.

The overhaul would begin in four of the country's most violent states: Tamaulipas, Jalisco, Michoacan and Guerrero.

It was in the Guerrero city of Iguala where the 43 students vanished on September 26 after they were attacked by local police.

Prosecutors say Iguala's mayor ordered his police force to confront a group of students over fears they would disrupt a speech by his wife.

Guerreros Unidos gang henchmen confessed to killing the students and incinerating their bodies after officers turned them over.

In the latest massacre, 11 bodies were found Thursday on a road near the Guerrero town of Chilapa following reports of a shootout, state and municipal officials said.

"In addition to being executed, the 11 people were decapitated and subsequently some were burned," said a state government official who requested anonymity.

A note was left near the bodies with a message addressed to the criminal group "Los Ardillos" (The Squirrels), with the words "Here's your trash," the official said.

A state police officer said the bodies had high-caliber bullet wounds. The victims appeared to be in their 20s.

Chilapa is 40 kilometers (25 miles) east of Ayotzinapa, where the teacher-training college of the 43 students is located.

Pena Nieto announced that he would ramp up the presence of federal forces in a gang-plagued region known as Tierra Caliente (Hot Land), which straddles Guerrero and Michoacan, as well as Jalisco and Tamaulipas.

Peña Nieto is not the first Mexican president to seek to reform the police.

Some 400,000 active federal, state and municipal police forces across the country have undergone anti-corruption exams with polygraph tests -- a system that began under his predecessor, Felipe Calderon.

The interior ministry said this month that 13 percent of municipal officers failed the exam, compared to 10 percent of state and six percent of federal forces.

The non-governmental organization Common Cause said this week that 42,214 federal, state and municipal police staff are still working despite failing the "control de confianza" (trust test).

When he took office in December 2012, Peña Nieto vowed to reduce the everyday violence plaguing the country.

But he maintained the controversial militarized strategy of Calderon, who deployed 50,000 troops against the drug cartels in 2006.

In an editorial, the national daily El Universal noted that past governments launched anti-crime measures in response to public discontent, with some positive results.

"But the depth of the problem is so large that these actions have not changed an indisputable fact in the perception of people, that crime continues to grow," it said.

"This time, the State's response will have to be stronger."