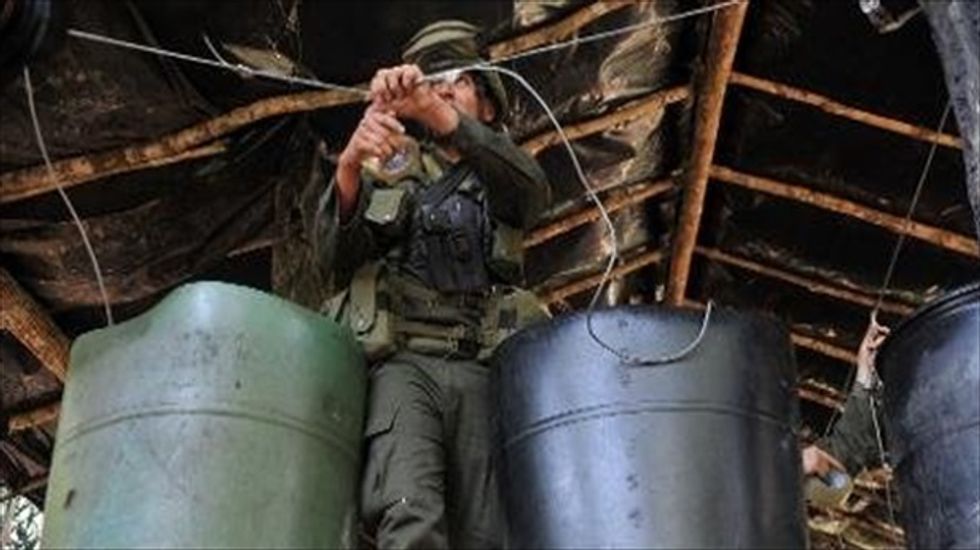 Colombia's FARC guerrillas confirmed Tuesday that they are holding a missing general whose kidnapping caused the government to suspend peace talks aimed at ending the country's 50-year-old conflict.

In a statement datelined from the Colombian mountains and published on the FARC website, the leftist rebels' Ivan Rios unit said it had captured General Ruben Alzate, Corporal Jorge Rodriguez and army adviser Gloria Urrego, who disappeared Sunday in the remote department of Choco.

"Once they were clearly identified, despite wearing civilian clothes, the three were captured by our units on the grounds that they are enemy military personnel, traveling in their official capacity, in an area of war operations," said the statement.

The guerrillas pledged to "respect (the hostages') lives and physical and mental well-being."

Alzate, who heads an army task force charged with fighting rebels and drug traffickers in the jungle-covered Choco region, is the highest-ranking officer to be captured by the FARC in five decades of conflict.

Officials say the general was traveling by boat to visit a civilian energy project when he was ambushed.

His captors said they would respect FARC leaders' orders on what to do with their hostages.

"We are subordinate to whatever decisions our commanders adopt," they said.

The kidnapping has thrown the peace process into crisis as it prepares to mark its two-year anniversary Wednesday.

President Juan Manuel Santos, who has made the peace talks the centerpiece of his government over fierce opposition from critics, warned Monday that the future of the negotiations hung in the balance.

"The FARC's commitment is at stake here," he said. "How they decide to act now will determine whether we can continue moving forward."

The United States condemned the kidnapping, which State Department spokesman Jeff Rathke said flew in the face of "the Colombian government's efforts to bring peace to the Colombian people."

The European Union has also condemned the kidnapping, calling for the hostages' immediate release.

FARC negotiators in Havana, where the talks were due to resume Tuesday before Santos suspended them, initially denied any knowledge of the general's whereabouts.

But after FARC fighters confirmed they were holding him, rebel commander Pablo Catatumbo, a member of the negotiating team, acknowledged the kidnapping and offered to help secure the captives' release.

He blamed the incident on the fact that the government has pursued peace talks without a ceasefire, which Santos has argued would strengthen the guerrillas' hand.

"This incident should make us reflect on the need to immediately address the issue of a bilateral ceasefire," Catatumbo told a press conference.

"A bilateral ceasefire would generate a calmer environment. We would avoid this and other incidents that can happen in the course of the war."

He said FARC negotiators were prepared "to contribute to a quick, sensible solution to this problem," adding: "The dialogue must continue."

Founded in 1964 in the aftermath of a peasant uprising, the FARC is the largest of the guerrilla groups active in Colombia, with about 8,000 fighters.

The conflict, which has at various times drawn in drug traffickers and right-wing paramilitaries, has killed more than 220,000 people and caused more than five million to flee their homes.

Santos, who won re-election in June in a vote widely seen as a referendum on the peace process, has also announced plans to enter talks with the second-largest guerrilla group, the National Liberation Army (ELN).

The negotiations with the FARC have so far reached deals on three broad issues: land reform, political participation for ex-rebels, and fighting the drug trade that has helped fuel the conflict.

Remaining items on the agenda are reparations for victims, disarmament, and the mechanism by which the final deal will be put into force.

The current talks are the fourth effort to negotiate an end to the conflict.

In 2012, the FARC pledged to no longer kidnap civilians for ransom. But the guerrillas reserved the right to take police and soldiers captive, considering them prisoners of war.