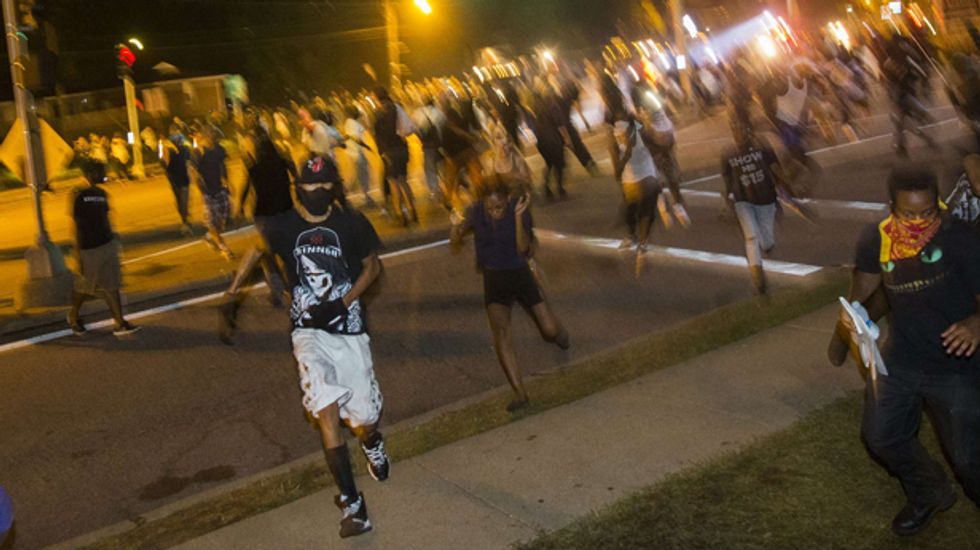 Demonstrators suddenly sprint away from police officers during further protests in reaction to the shooting of Michael Brown, near Ferguson, Missouri August 18, 2014. (REUTERS/Lucas Jackson)

Two men suspected of buying explosives they planned to detonate during protests in Ferguson, Missouri, once a grand jury decides the Michael Brown case, were arrested on Friday and charged with federal firearms offenses, a law enforcement official told Reuters.

Word of the arrests, reported by a number of media outlets Friday, came ahead of the grand jury's widely anticipated decision on whether the white police officer who fatally shot Brown, an unarmed black teenager, should be indicted on criminal charges.

He was instead placed on administrative leave, and Ferguson has been bracing for a new wave of protests, especially if the grand jury chooses not to indict Wilson. An announcement was believed to be imminent.

Against this backdrop of heightened tensions, according to a law enforcement source, two men described as reputed members of a militant group called the New Black Panther Party, were arrested in the St. Louis area in an FBI sting operation.

As initially reported by CBS News, the men were suspected of acquiring explosives for pipe bombs that they planned to set off during protests in Ferguson, according to the official, who spoke to Reuters on condition of anonymity because he was not authorized to publicly discuss the case.

The official said the two men are the same pair named in a newly unsealed federal indictment returned on Nov. 19 charging Brandon Orlando Baldwin and Olajuwon Davis with purchasing two pistols from a firearms dealer under false pretenses.

Both men were arraigned on Friday in federal court, the law enforcement source said.

The FBI and other federal agencies were reported to have stepped up their presence in the St. Louis area in recent days in anticipation of renewed protests after the grand jury's decision in the Brown case is made known.

An FBI official in St. Louis declined to comment except to say that the two men named in the indictment had been arrested. Officials from the U.S. Attorney's Office for eastern Missouri were not immediately available for comment.