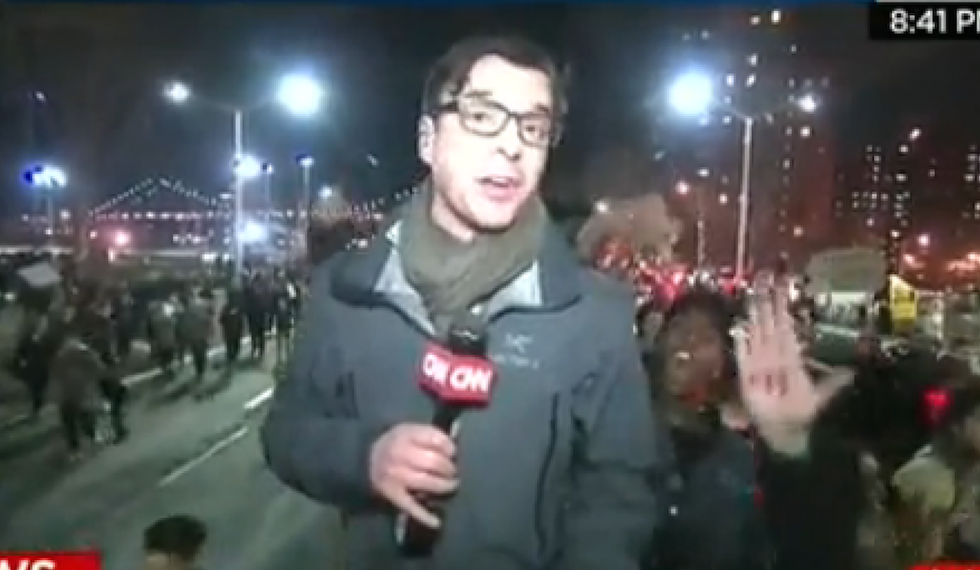 In an incident that demonstrates the potential perils of live news reporting, Tuesday night's edition of Anderson Cooper 360 on CNN featured several seconds of protesters shouting "F*ck CNN!" as they marched in New York City.

Mediaite reported that Cooper was speaking with reporter Miguel Marquez, who was reporting on a protest of the grand jury's decision not to indict Officer Darren Wilson for the killing of unarmed teen Michael Brown in Ferguson, Missouri.

In the video embedded below, a single protester runs into the camera's frame and shouts, "F*ck CNN!"

Other demonstrators quickly took up the chant, which was broadcast live to all of Anderson Cooper 360's viewers.

"And as you can hear," said Marquez, "they don't exactly love CNN, either. These people are willing to protest anything."

"Seems like people are now playing to the cameras, so let's move on from that," said Cooper as his producers shut down the video feed.

CNN has come under criticism for focusing so much of its coverage on its own personalities at the scene. Vice.com observed that anchor Don Lemon has covered the Ferguson protests like a "judgmental mom," complaining about the smell of pot smoke at protests and consistently siding against the demonstrators.

"The only difference is that your mom isn't on the news when she judges you," wrote Vice's Dave Schilling.

Watch the video, embedded below via Mediaite.com: