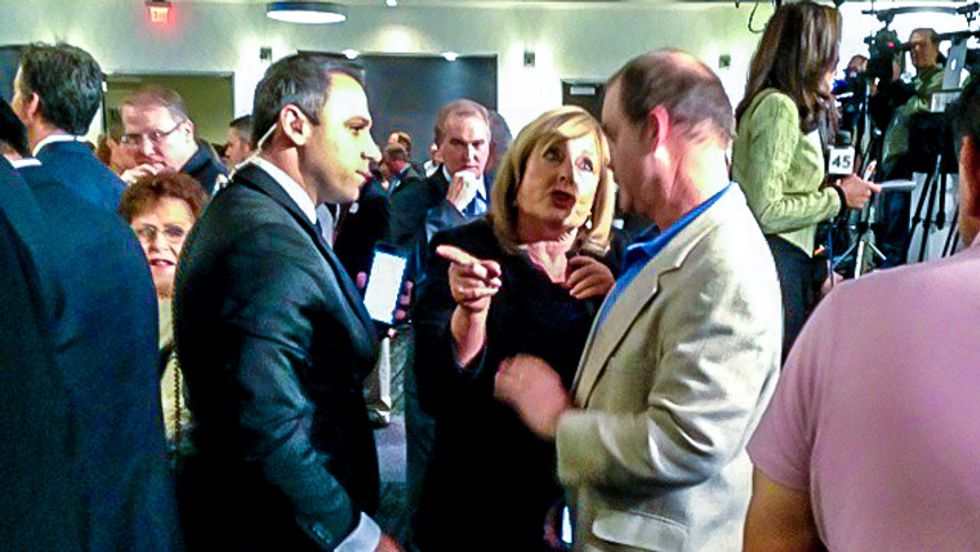 A supporter at an event for Lt. Governor-elect Dan Patrick (R-TX) allegedly assaulted a reporter because he tried to broadcast during a Christian prayer.

According to blogger Mike McGuff, KTRK reporter Foti Kallergis and other members of the media had been invited to a watch party with Patrick's supporters on election night.

"Nice! Just got assaulted by someone live on air," Kallergis tweeted at the time.

Blogger Juanita Jean obtained a photo of someone at the event trying to pull the Patrick supporter off of Kallergis.

"Deborah Wrigley from channel 13 had to step in and stop the Republican supporter (tan jacket) from attacking her fellow reporter (black suit) on the air," Carey wrote. "The man was offended because the reporter was live on air during a prayer at Lt.Governor Elect Dan Patrick's watch party."

To make matters worse, Carey said that another one of Patrick's supporters approached Wrigley and "called her a f*cking b*tch."

"Keep in mind this is during a physical assault over interrupting a prayer," he added. "Where was Jesus in this room?"

Deborah Wrigley from channel 13 had to step in and stop the Republican supporter (tan jacket) from attacking her fellow reporter (black suit) on the air. The man was offended because the reporter was live on air during a prayer at Lt.Governor Elect Dan Patrick's watch party. Wrigley says then another woman from the event approached her and called her a fucking bitch. Keep in mind this is during a physical assault over interrupting a prayer. Where was Jesus in this room?

Watch the video below of Patrick's victory speech via KTRK.