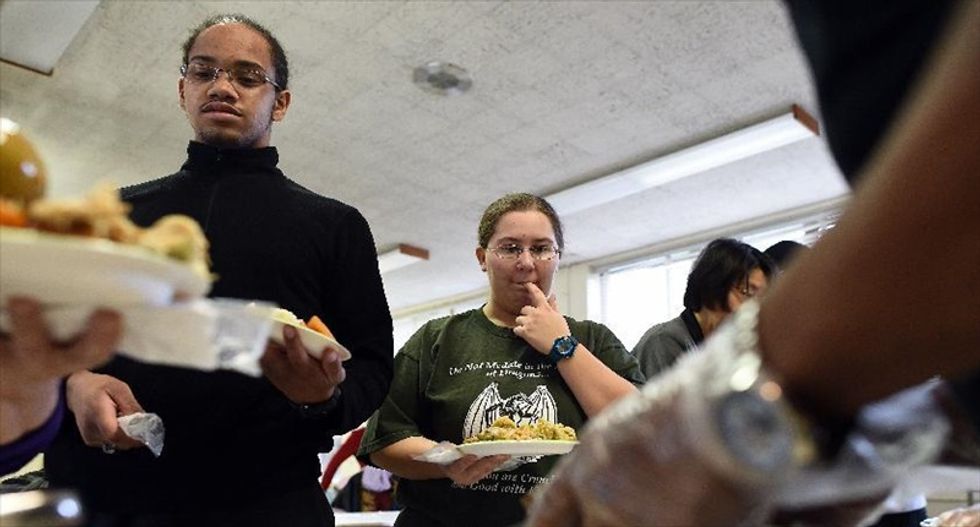 People are served with a Thanksgiving meal at a church in Ferguson, Missouri, on Nov. 27, 2014. Photo by Jewel Samad for Agence France-Presse.

Police and protesters were absent as a Thanksgiving Day calm descended on downtown Ferguson on Thursday, allowing residents to clean up after unrest that battered the St Louis suburb, even if was not clear how long the peace would last.

The area comprising the Police Department, City Hall and dozens of local businesses was the center of sometimes violent protests after Monday's decision by a grand jury not to charge a white police officer for fatally shooting an unarmed black teenager.

On a stretch of road that earlier in the week was the scene of clashes between police and demonstrators that included arson, looting, tear gas and smoke bombs, residents were at work on Thursday boarding up stores, cleaning the streets and painting murals to bring some color back to the neighborhood.

"We feel helpless, but we wanted to do something," said Darcy Edwin, 26, a teaching assistant who was painting a large tree on a boarded up eye-care store just down the street from City Hall. "Doing this is something to be thankful for - it's a reminder of what this holiday is all about."

Crews of volunteers helped clean the sidewalks. Others handed out coffee on the sunny but brisk afternoon. Many store front signs urged peace.

Alex Sheen, 29, drove more than 500 miles (800 km) overnight from his home in Cleveland, Ohio, to come and help residents rebuild over Thanksgiving. He took a break from painting the boards covering a Chinese restaurant to eat a donut.

"There are real issues here, but why would you do that to your businesses? There are more productive ways to send a message."

Ferguson became the focal point of a national debate on race relations after officer Darren Wilson shot dead Michael Brown on Aug. 9. Protests flared again on Monday when it was announced that a grand jury had decided not to charge Wilson, and spread to other cities, including New York, Los Angeles and Oakland.

More demonstrations were planned in Ferguson on Thursday night and Friday, organizers said, and some in the city said they were worried the Thanksgiving Day calm was just a pause before renewed unrest.