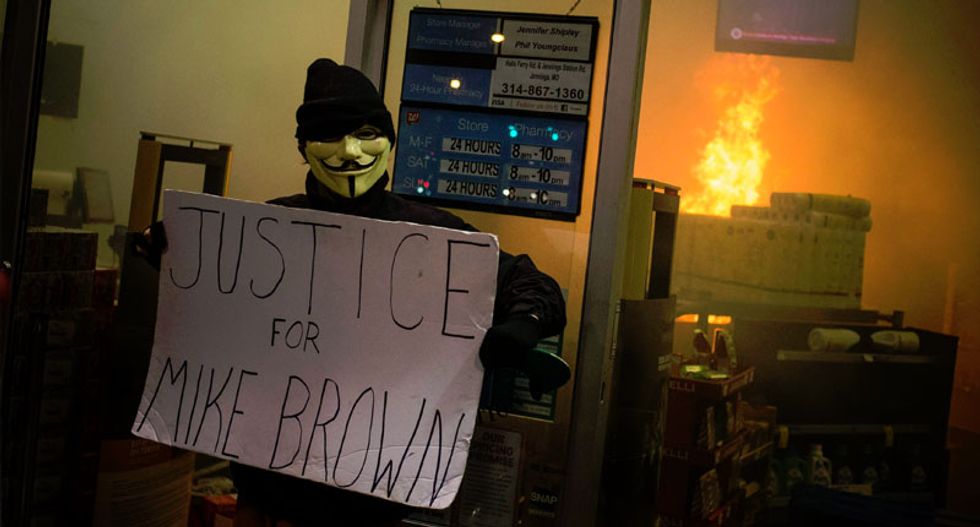 A protester holds a sign outside a burning Walgreens drug store after a grand jury returned no indictment in the shooting of Michael Brown in Ferguson, Missouri, November 24, 2014. REUTERS/Adrees Latif

A group of people in Ferguson, Missouri, on Friday attempted to enter a main thoroughfare of the St. Louis suburb to clean up stores damaged in this week's racially charged rioting but a line of police blocked them from entering the area.

West Florissant Avenue is home to a Walgreen Co store and other businesses that were looted or burned on Monday after a decision by a grand jury not to indict a white police officer in the shooting death of an unarmed black teenager in August.

Armed with brooms and trash bags, a small group of people tried to walk down the avenue, which has been closed to traffic since Monday, before officers stopped them.

"There are businesses and people sectioned off from the rest of Ferguson," said Lou Bailey, 37, a project manager. "We need to get in there and clean up."

Ferguson, a predominantly black city of about 21,000 people where almost all the political leaders and police are white, became the focal point of a national debate on race relations after police officer Darren Wilson shot and killed Michael Brown on Aug. 9. The U.S. Justice Department is investigating possible civil rights abuses and President Barack Obama has called for reflection on the difficulties minorities face in the country.

The grand jury's decision on Monday not to charge Wilson sparked protests in Ferguson and more than 100 people were taken into custody on Monday and Tuesday nights. Buildings were torched, stores looted and police in riot gear used tear gas to disperse crowds.

Wilson, who was placed on administrative leave, has said he feared for his life and acted in self-defense when he shot Brown. Brown's family said Wilson acted with malice and should stand trial.

Ferguson was mostly quiet for a second day in a row after the Thanksgiving holiday and a sunny but cold weather kept away most protesters on Thursday. Again on Friday, there were no demonstrations in the area around the Ferguson police headquarters, the scene of the worst violence earlier in the week.

Demonstrations also dwindled in major cities across the country, where dozens of protesters were arrested after the grand jury's decision.

The National Guard had closed off a large parking lot in front of a Walmart store just north of Ferguson Thursday night, as authorities anticipated the possibility of demonstrations on Black Friday, the traditional opening of the holiday shopping season.

Afterward, the store opened but decided to cancel Black Friday sales and moved merchandise to other locations in the St. Louis area, employees said. About five protesters later marched through the store shouting slogans.

Inside another Walmart store in the nearby suburb of St. Charles, about 75 protesters marched peacefully on Thursday to the bemusement of bargain-hunters pushing shopping carts brimming with goods. The group dispersed peacefully after police ordered them to go home.