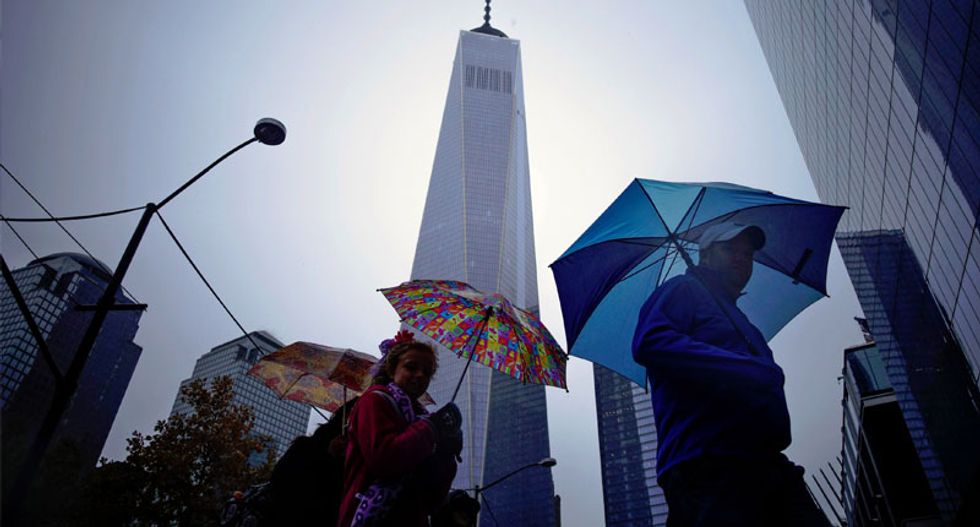 People walk next to the One World Trade Center in New York November 1, 2014. REUTERS/Eduardo Munoz

Thirteen years after the Sept. 11 attacks, the first tenants moved their belongings into the newly built One World Trade Center with enthusiasm tinged by emotional remembrance.

About 200 Condé Nast employees on Monday walked through the revolving doors of the building, America's tallest skyscraper - the first wave of 3,400 company staffers to occupy the 104-story gleaming tower in Lower Manhattan by February 2015.

Chief among them was Condé Nast's chief executive, Charles Townsend, whose gray Mercedes rolled into the tower's south entrance, where he was greeted by developers and other officials.

"This is a terrific day for Lower Manhattan, a wonderful day for New York City and an absolutely great day for Condé Nast," Townsend said.

The publishing company, which owns The New Yorker, Vanity Fair and other magazines, is the first renter to set up offices in the tower, where it will occupy floors 20 to 44.

"I can understand the fear," said Vijay Ramcharitar, a finance analyst at Condé Nast. "But I don't think you look at this building with fear, you look at it with inspiration."

One World Trade Center stands on the location where more than 2,700 people perished when hijacked planes slammed into the twin towers on Sept. 11, 2001. It is directly across from the 9/11 Memorial.

Some spoke of history going full circle at last.

Maryanne Casey, who works for a legal affiliate of Condé Nast, said moving into her new office evoked particularly personal memories. She once worked at the World Trade Center and her firefighter brother helped in the aftermath of the attacks.

"It's a great tribute to America to see this," she said. "I'm very proud to work here."

The new building is more than 58 percent leased, according to a statement from the Durst Organization, a real estate company that manages the property jointly with the Port Authority of New York and New Jersey.

Construction workers who helped the $3.9 billion tower rise from the rubble, overcoming repeated delays that pushed back the original 2006 completion date, put finishing touches on the building's glass exterior and watched with pride as its first tenants settled in.

"It's a great building," said one worker wearing a hard hat and yellow vest.