Five soldiers killed as tanks from Russia move into Ukraine 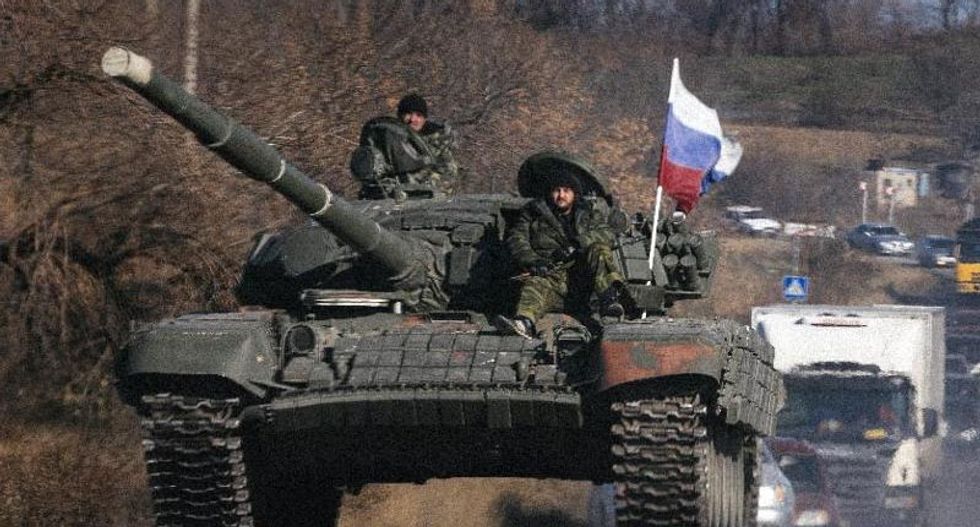 Pro-Russian separatists ride on top of a tank near the town of Krasnyi Luch in eastern Ukraine, on October 28, 2014 (AFP Photo/Dimitar Dilkoff)

Ukraine said Friday that dozens of tanks and truckloads of soldiers had crossed from Russia into Kremlin-backed rebel territory, as five servicemen were killed in fighting that made a mockery of a supposed ceasefire.

There was no way to confirm the claims independently.

Lysenko said five Ukrainian soldiers were killed and 16 injured in the past 24 hours in clashes between government forces and pro-Moscow rebels, underscoring the emptiness of a two-month truce that both continue to insist they are respecting.

Fifteen civilians were wounded by shrapnel in thev separatist bastion of Donetsk, the mayor's office said, in a night of shelling in two neighbourhoods near the ruins of the airport, where government troops are holding out.

An AFP journalist reported heavy artillery bombardments had resumed in the area around the strategic transport hub late Friday.

While the September truce agreement has seen full-scale confrontations halt along most of the frontline, shelling has continued at flashpoints around the industrial east. Claims of fresh troop movements are stoking fears of a return to all-out fighting.

Ukrainian President Petro Poroshenko warned German Chancellor Angela Merkel in a phone call of an escalation in the conflict following "significant departures" from the agreed peace plan, his office said.

The latest casualties came after Kiev had already moved to isolate the Kremlin-backed separatist regions, firming up the split of the ex-Soviet republic in a crisis that has sent East-West relations to their lowest ebb since the Cold War.

Some 150 mourners attended an emotional memorial service in the ravaged industrial hub for two teenage boys killed when a shell hit a school playing field Wednesday. Kiev and the insurgents blamed each other for the incident.

The rebels held leadership elections on Sunday, defying Kiev with a move that sought to formalise their control over the separatist-held territory.

In response, Ukraine's border guards announced obligatory passport controls around the rebel-held areas on Thursday, effectively setting up a de facto border despite Kiev's insistence that it has not given up on reclaiming sovereignty.

That move dovetailed with a government decision to sever state subsidies worth some $2.4 billion (1.8 billion euros) each year to the guerrilla regions, including pensions, though not heating gas and electricity.

Kiev and the rebels inked peace accords in September aimed at saving Ukraine's unity and ending a conflict that has claimed over 4,000 lives, with rebel zones being given autonomy, but not independence.

However in the wake of Sunday's rebel polls, Poroshenko said separatists had "torpedoed" the proposal and ordered troops to reinforce frontline cities, as he asked parliament to scrap the autonomy offer.

The United States and European Union have already slapped tough sanctions on Moscow and Poland's foreign minister has warned of a new Iron Curtain falling across Europe.

Top EU diplomat Federica Mogherini said Thursday that the 28-nation bloc would review sanctions on Russia in 10 days, with pressure mounting to add to the punitive measures after Moscow endorsed the rebel elections.

Moscow's foreign ministry on Friday appeared keen to pull back slightly by specifying it "respected" -- but had not officially recognised -- the results of the vote, although it was not clear whether this semantic nicety would be enough to ease Western criticism.

The financial isolation over the Ukraine crisis -- along with falling oil prices -- has hammered Russia's flagging economy. The ruble plunged early on Friday by over three percent to a new record low of over 60 to the euro before recovering to around 57.

As concerns mounted over the volatile currency, Russia's central bank went back on a pledge Wednesday to limit interventions by saying it was now willing to splash the cash to prop up the ruble.

In a rare chance for dialogue, Russian Foreign Minister Sergei Lavrov will meet his US counterpart John Kerry Saturday ahead of the APEC summit in Beijing next week, Russian news agencies reported.

But in a sign of how far relations have slumped, the Kremlin ruled out an official sit-down between President Vladimir Putin and US leader Barack Obama.